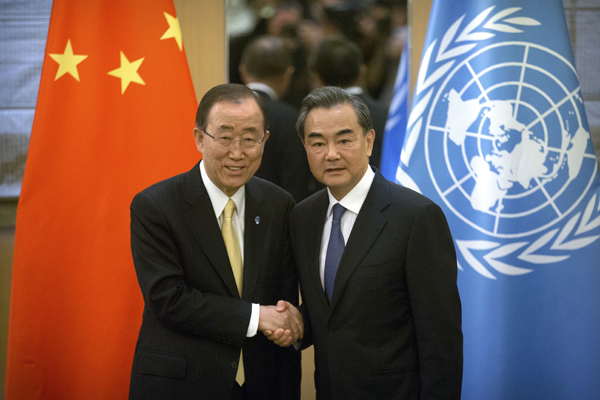 UN Secretary General Ban Ki-moon, left, and Chinese Foreign Minister Wang Yi pose for a photo at the end of their joint press conference at the Diaoyutai State Guesthouse in Beijing on Thursday. [AP/NEWSIS]

According to the United Nations, Ban will convene a Global Sustainable Transport Conference on Nov. 26 and 27 in Ashgabat, Turkmenistan, and the Hankook Ilbo reported that South Korean President Park Geun-hye and North Korean leader Kim Jong-un have been invited to the conference on June 15.

The Blue House confirmed Thursday that Ban’s invitation was received. “But we have not made any decision yet on her attendance,” said presidential spokesman Jung Youn-kuk.

Since his tenure as the UN chief began in 2001, Ban has made continuing efforts to engage the reclusive communist regime and stressed his intention once again on Thursday during his visit to China.

“As the UN secretary general, I am ready to make a contribution at anytime to resume inter-Korean talks and ease tensions on the peninsula,” he said during a press conference jointly held with Chinese Foreign Minister Wang Yi.

During his visit to South Korea in May, he also said it was regretful that his ambition for a trip to the North was never realized.

“I will keep trying for an opportunity,” he said during his meeting with senior journalists from the Kwanhun Club at the time, adding that he had a number of opportunities to visit the North, but Pyongyang abruptly canceled each.

“There was a particularly close one last year,” he said, “but the North postponed it.”

Speculations were particularly high in November 2015 that Ban would visit the North and meet with the Kim Jong-un. If realized, Ban’s visit would have be the first by a UN chief to North Korea in 22 years. Two other UN secretary generals, Kurt Waldheim and Boutros Boutros-Ghali, visited North Korea and both met with the North Korean founder, Kim Il Sung.

Ban did visit Kaesong in 2006 when he was South Korea’s foreign minister, but Pyongyang canceled another planned trip to the industrial complex in May 2015.

It is unclear whether the North received Ban’s invitation. The conference, hosted by Ban, will be attended by key stakeholders from government, the private sector and civil society. The meeting will address sustainable transport in all areas including road, rail, aviation and maritime from the perspective of UN sustainable development goals.