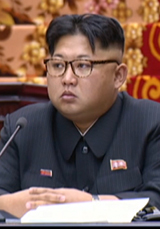 In an unprecedented move, the United States Wednesday sanctioned North Korean leader Kim Jong-un for his role in his country’s human rights abuses, which is expected to prompt a backlash from Pyongyang.

The U.S. Department of State compiled a list of 15 North Korean senior officials and eight agencies responsible for the violation of human rights in a new report and submitted it to Congress.

In turn, the Department of Treasury on the same day added to its blacklist 11 top officials in North Korea, including Kim, and five entities to hold them accountable to Pyongyang’s abuses of human rights. Four individuals and three entities were already blacklisted by the Treasury’s Office of Foreign Assets Control for supporting Pyongyang’s weapons of mass destruction program (WMD).

The sanctions enable the freezing of any property or assets within U.S. jurisdiction of anyone or any entity on the list and can also prohibit financial transactions with American citizens.

The Treasury Department said in a statement that it sanctioned Kim “for having engaged in, facilitated, or been responsible for an abuse or violation of human rights by the government of North Korea.”

“Under Kim Jong-un, North Korea continues to inflict intolerable cruelty and hardship on millions of its own people, including extrajudicial killings, forced labor, and torture,” said Adam J. Szubin, acting under secretary for Terrorism and Financial Intelligence.

This latest measure, Szubin said, highlights Washington’s “condemnation of this regime’s abuses and our determination to see them stopped.”

This report, which identifies North Korean officials and entities responsible for or associated with serious human rights abuses or censorship in the regime, is pursuant to the stipulations in North Korea Sanctions and Policy Enhancement Act, enacted on Feb. 18 after the legislation was signed by President Barack Obama.

John Kirby, a State Department spokesman, said in a statement, “The report represents the most comprehensive U.S. government effort to date to name those responsible for or associated with the worst aspects of the North Korean government’s repression, including serious human rights abuses and censorship.”

He added it aims to “send a signal” to all related government officials “with the goal of changing their behavior.”

Washington estimates 80,000 to 120,000 individuals, including children and family members of the accused, are detained in North Korea’s political prisons camps.

Kim is listed in the report as first chairman of the National Defense Commission, the highest guiding organ of the military, which was replaced recently with the newly-created State Affairs Commission during a North Korean Supreme People’s Assembly on June 29. The State Department report noted reports of this change in a footnote.

The State Security department, the report says, is implicated in human rights violations including torture, deliberate starvation, and sexual violence, and has a prisons bureau that manages the country’s network of political prison camps.

The Ministry of People’s Security, it says, operates the majority of North Korea’s labor camps and detention facilities which use torture and other forms of abuse.

The North Korean leader’s younger sister Kim Yo-jong was not included in the report presumably because of her unclear role in rights violations. However she may be included on Washington’s blacklist in the future.

Washington and Seoul officials say they expect the latest sanctions to be symbolic but also effective.

“This isn’t just symbolic - this identification of these individuals,” said Kirby in a briefing in Washington later that day. “It really, for the first time, puts them out in the public domain in a way that they haven’t been necessarily before.”

He said the measure “could have repercussions,” adding that “quite frankly, there could be global financial implications for some of these individuals.”

The South Korean government on Thursday lauded the new sanctions by Washington and said it will cooperate in international efforts to curb human rights violations in Pyongyang.

“Concretely designating officials responsible for North Korea’s human rights violation, including Kim Jong-un, holds significance because it makes their liability more certain and clear from here on,” said Cho June-hyuck, spokesman of the Ministry of Foreign Affairs, in a briefing in Seoul on Thursday. “So our government highly regards and welcomes this measure.”

Cho continued, “This measure is the first time an individual country or international organization has imposed sanctions on North Korea for its human rights.”

He said it served as “a chance to reconfirm the United States’ firm commitment to continuing to strengthen layered and multi-faceted sanctions against North Korea.”

Washington took into account a landmark report released in February 2014 by the UN Commission of Inquiry (COI) on human rights in North Korea that concluded senior members of North Korea’s military regime, including Kim, had committed or overseen a broad range of crimes against humanity.

It advised the UN Security Council to bring the issue to the International Criminal Court (ICC).

Pyongyang has in the past responded sensitively to heightened international condemnation of its atrocious human rights record following the COI report, sometimes employing a charm offensive through increased diplomatic activities both in the United Nations and overseas, sometimes through bellicose language lambasting Washington and Seoul and stepping up military action.

“This is not just a symbolic move but shows the U.S. government’s firm resolution as seen through its policies thus far in requesting North Korea to improve its human rights situation,” said a South Korean foreign affairs official on Thursday.

Through “naming and shaming,” he said, this latest measure “sends a clear warning message saying we know who is responsible for rights violations, as well as what they did, and that they will take responsibility for the actions.”

He added, “This sanctions designation is not the end of the matter but according to the North Korea sanctions act, the content will be supplemented every six month.”

Experts predict a backlash from Pyongyang, with continued soured relations with Seoul, which have worsened since North Korea’s fourth nuclear test in January.

“North Korea will retaliate vehemently, calling this measure a part of [Washington’s] plan for the collapse of its regime,” Yang Moo-jin, a professor at the University of North Korean Studies, told the JoongAng Ilbo Thursday.

“Following Seoul and Washington pressuring the North to denuclearize, targeting Kim Jong-un and strangling him specifically [with sanctions], it looks bleak for the current government to revive inter-Korean relations or resume the possibility of dialogue.”