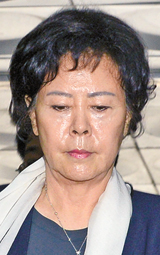 Shin Young-ja, the executive director of the Lotte Scholarship Foundation, was arrested by Seoul central district prosecutors on Thursday, becoming the first member of the Lotte chaebol family to be detained.

Shin, 74, is the eldest daughter of Shin Kyuk-ho, the founder of the Lotte Group, Korea’s fifth largest conglomerate.

The Seoul prosecutor’s office arrested her on charges of accepting bribes of some 3 billion won ($2.5 million) from companies whose stores are located in the Lotte Duty Free Store, including the cosmetics brand Nature Republic, in return for having their stores stationed in strategic locations. She is also accused of having siphoned some 4 billion won from another company she is involved with.

When she appeared in front of the court on Wednesday to attend a warrant hearing, Shin expressed strong dissent and dissatisfaction with the prosecution’s request to arrest her. Even when she was being transmitted to the detention center on Thursday morning, she asked, “Why do I have to be arrested?”

Responding to Shin’s anger, a prosecutor investigating the case said, “It might be difficult for her to understand why she is locked up in a cell that is overseen by a prosecution team that investigates the defense industry.”

One of the departments in the prosecutor’s office in charge of investigating defense industries has been inspecting Shin’s alleged taking of bribes from Jung Woon-ho, the former CEO of Nature Republic.

Although Shin’s questioning, which will take place starting today, will be held in a building responsible for defense industry issues, a prosecutor in charge of a larger, unexplained probe of the conglomerate will also be present.

“Executive director Shin has other executive statuses in other Lotte-affiliated companies,” said the prosecutor. “We must investigate whether she played a part in the conglomerate’s creation of a slush fund.”

The prosecutor added, “We are planning to ask questions that prosecutors failed to ask because of her old age.”