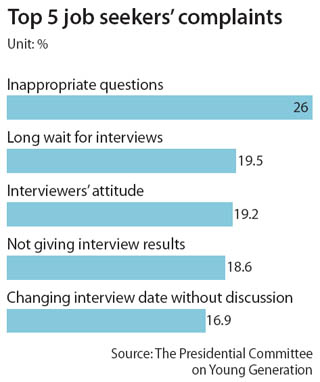 Recent research shows that more than six out of 10 job seekers had unpleasant experiences during their job interviews.

According to the Presidential Committee on Young Generation, an advisory board under the President, about 65 percent of 1,068 job seekers aged 19 to 29 said they were uncomfortable during their interviews due to various reasons including sexual harassment.

Among those who said they had unpleasant experiences, 26 percent of them said they felt so because the interviewers ask them questions that are private and totally irrelevant to the job.

Kang, a 26-year-old female job seeker, was recently asked questions like “What kind of man do you like?” She said she is afraid of taking interviews now.

Another female job seeker surnamed Kim said she had a similar experience.

She answered the type of man she prefers and the male interviewer winked at her and said, “then you would want to date someone like me.”

According to the survey respondents, some interviewers took their shoes off and playing with their feet during the interview.

“They asked the guys about their school majors but asked me when I am going to get married,” said a female job seeker. “They also told me to lift up the chair I was sitting on, saying physical strength is one of the biggest factors needed for work.”

Furthermore, 4.3 percent of job seekers said they noticed that the company is not planning to hire anymore after they were told that they were hired.

Many young job seekers also complained about interviewers changing the interview date without explaining why.

“I lived on Jeju and I bought a flight ticket to take an interview in Seoul,” one of the survey respondents said. “And they just told me that they weren’t able to do interview just one day before, so I had to cancel my trip.”

About 62 percent of those with unpleasant experiences said they suffered from stress and about 47 percent said they lost their confidence in general. Some 24 percent did not feel like finding jobs after the experience and roughly 15 percent said they worry about taking interviews in the future.

Meanwhile, some 43 percent said they have a hard time improving their interview skills and another 39 percent said it is hard for them to research about companies.

Furthermore, about 9 percent said they do not like the fact that they have to worry about what to wear and how they look. In fact, 60 percent of job seekers said they purchase new clothes for job interviews.

The Presidential Committee on Young Generation and Youth Hope Foundation said they are starting a program to help job seekers prepare for job interviews this month.