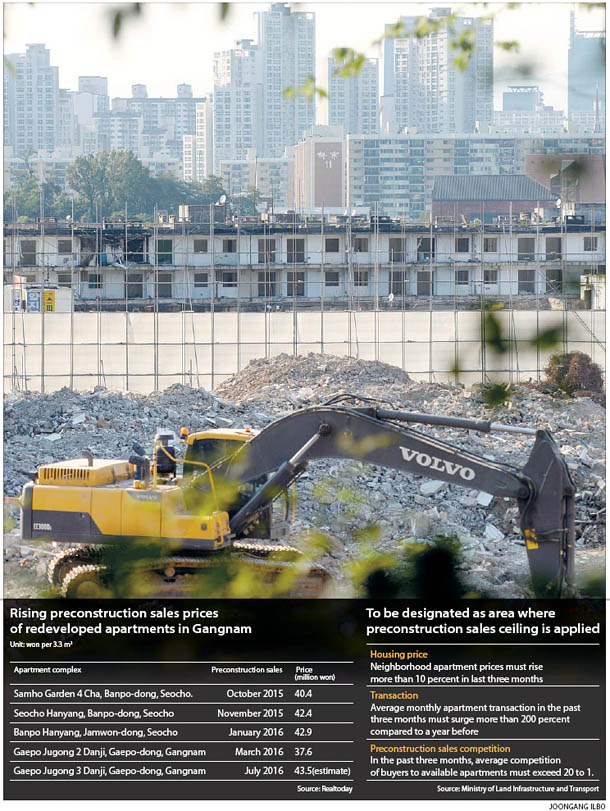 The recently rejuvenated development projects in the Gangnam area seem likely to be cancelled as the government has decided to tighten its evaluation process.

The Korea Housing and Urban Guarantee Corporation (HUG) has decided to end its preconstruction sales guarantee for apartments, especially those with high presale prices.

The guarantee is set up to protect homebuyers when construction projects fail.

Companies need the guarantee in order to actually sell apartments.

On Tuesday, HUG announced that it will better evaluate apartment presales whose prices are deemed excessive including the Jugong 3 Complex project in Gaepo-dong, Gangnam.

A stricter evaluation means that now HUG will only issue a guarantee after its regional office and headquarters have both determined that the presale price is fair compared to apartment values in the surrounding areas.

“The headquarters plan to review the Gaepo Jugong 3 Complex project and after a week it will once again undergo a special evaluation,” a HUG official told the JoongAng Ilbo.

This is the first time that a reconstruction project in Gangnam with huge demand has been under review by the HUG, as usually the targets are neighborhoods that have low demand and whose construction development may stop due to a lack of funding created by presales.

By the end of May, there were only 52 unsold apartments in the Gangnam area, which is exceptionally low compared to other regions.

“In the case of presales apartments whose selling prices are exceptionally high, there is a possibility that the massive number of homebuyers may not move in when apartment values plummet,” said a HUG official. “As the public company that is in charge of guaranteeing the presales of apartments, we must closely monitor the presale price.”

Previously the most expensive was Banpo Hanyang Apartments in Jamwon-dong, Seocho, also within the Gangnam area. The apartments sold for 42.9 million won per 3.3 square-meters.

The enhanced valuation on the presales guarantee is considered in the market as a revival of the limitation on presale prices.

The regulation limiting the ceiling on the presale price of apartments, based on the construction cost and the value of the land that the building is built on, was abolished in June. But the regulation still applies on public property and in new cities.

The union of previous homeowners cannot get approval from the regional government to sell additional apartment units that will be built on the reconstruction project without the guarantee certificate, which can only be obtained from the HUG.

“In order to get the preconstruction sale guarantee the price on the apartment would have to lowered to show HUG that the risks are small,” said an industry insider, who spoke on the condition of anonymity.

The reason HUG has decided to step up its evaluation is largely because of recent controversy over reconstruction projects in Gangnam.

The competition for new apartment in Gangnam has sharply risen. The neighborhood has long been a popular place thanks to its strong education environment, which sends many students to leading universities, and because of its high investment value in real estate terms.

The competition for the Gaepo Jugong 2 Complex apartments in March was 45 to 1, despite the fact that the apartment was being sold for 37.6 million per 3.3 square meters.

Considering the current value of Jugong 3 Complex, in just four months the apartment value in Gaepo-dong has risen 5 million won, or 16 percent.

Construction companies could face serious financial problems when homebuyers abandon apartments after values drop below the preconstruction sales price. And when the people who were supposed to move in cannot pay their loans, this could lead to serious debt insolvency.

“When the preconstruction prices go up the construction companies could further increase the number of apartments that would be built but this could lead to excessive supply,” said Kwon Dae-joong, a real estate professor at Myongji University.

Although the government has set a system that could flexibly apply the price ceiling, it is considered unpractical.

First, in order for an apartment construction project to be labeled as an area where the price ceiling will be applied, the apartment price has to rise more than 10 percent in three months.

Additionally, the average monthly transaction has to increase more than 200 percent compared to the same period a year ago and the average ratio of homebuyers to available apartment units has to exceed 20 to 1.

Furthermore, the current consumer price index has to be incorporated in the evaluation before applying for the price ceiling. Hence, the only alternative card that the government has been able to play was the preconstruction sales guarantee. But the construction industry is protesting the strengthened evaluation.

The industry official said forcing the price to be readjusted could only attract speculative investments that only profit from the rising apartment prices after construction is done while purchasing the valuable apartments at a lower price than it should be.