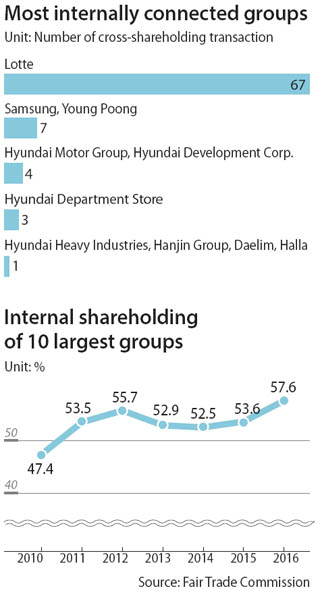 Lotte Group, the nation’s fifth largest retail and confectionery giant, still has the most internally connected shareholding structure, which perhaps explains why the group is part of an ongoing prosecutors’s probe.

According to a report by the Fair Trade Commission (FTC) on Thursday, Lotte has a total of 67 cross-shareholding transactions as of April. This is the highest among the world’s 65 largest businesses (those with more than 5 trillion won [$4.3 billion] in assets).

Although Lotte dismissed as many as 349 such transactions compared to a year earlier, the figure suggests the complexity of the group’s operations.

Cross-shareholding refers to the cross-ownership of stock by more than three subsidiaries, giving them more power. The FTC has, since 2014, banned the largest businesses from making such transactions.

The FTC updates its list of the largest business groups and their shareholding structures every year.

As the antitrust agency, the commission inspects stake distribution among owner family members and shareholding structures among their subsidiaries in order to stave off possible unfair trading practices that might affect the business of smaller firms.

“Although Lotte has removed much cross-shareholding tie-ups,” the FTC said, “the group still has the most complex shareholding structure among Korean conglomerates.”

Although shares actually held by owners and their family members are declining, the growing shares of the total internal transactions indicate that owners’ control is still growing.

Among the top 10 groups, owners held about a 0.9 percent stake in their groups as of April. Owner family members hold about 2.6 percent.

For example, Lotte Founder Shin Kyuk-ho and family members hold managerial rights through just a 2.4 percent stake over the group’s 87 affiliates in a variety of fields ranging from food, hotels and amusement parks to construction and chemicals, according to the FTC.

The total stake internally held by the Lotte family and the group subsidiaries stood at 83.73 percent, up 21.3 percentage points from 2015.

“The total internal shareholding of the conglomerates stood at 29.9 percent, up 0.5 percentage points from a year earlier,” the FTC noted in the report. “The increase was largely led by Lotte and some others.”

Lotte’s internal stakes spiked due to the inclusion of stakes held by family members or overseas subsidiaries into subsidiaries at home.