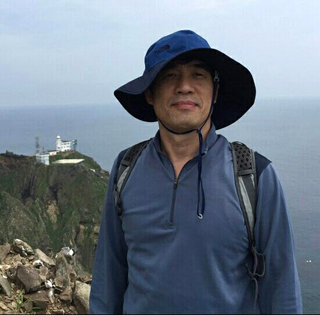 Park Seon-ju, a professor in Yeungnam University’s bioscience department, visits the Dokdo islets once every three months to trace the origin of plants there. [PARK SEON-JU]

A local scientist claims he is establishing Korea’s “sovereignty” over the flora of the Dokdo islets by tracing the origin of plants.

Park Seon-ju is a 50-year-old professor of bioscience at Yeungnam University who has been studying plants on the Dokdo islets for the past 14 years and has identified the existence of 57 plant species on the islets.

“About 19 species on the Dokdo islets have Japanese names including Sedum oryzifolium makino,” said Park.

He added, half-jokingly, “This is why I started tracing the origins of plants on the islets. I’ve started something like an ecological sovereignty movement over the islets through my research.”

In 2015, Park discovered that Euonymus japonicas, commonly known as Japanese spindle, and Sedum takesimense nakai, a kind of stonecrop, are endemic to Korea.

“Dokdo islets’ spindle tree originated in Yeosu in Jeolla,” said Park. “The arctic daisy, a kind of chrysanthemum, is from Yangyang in Gangwon.”

Park still visits the Dokdo islets once every three months to continue his research.

“It takes more than a year to trace the origin of just one plant species,” said Park. “Because one can only publish scientific findings in famous science journals like ‘Plos One’ only when there’s scientific evidence.”

In 2013, Park wrote in the scientific journal “Gene” about his finding that Aster sphathulifolius maxim, or the arctic daisy, is also of Korean origin. That year, he traveled to Ulleung Island, Pohang in North Gyeongsang, Yangyang and rural villages near the Yellow and South seas in order to collect arctic daisies. He then compared their DNA to samples from the Dokdo islets.

To identify the means by which the species were transported to the islets, he researched whether seamen in the East Sea visited the islets to hunt Japanese sea lions and whether migratory birds inhabited areas where arctic daisies grow on the islets.

“I eventually found out that arctic daisies were transferred by migratory birds and ocean tides from Pohang to Ulleung Island and finally to the Dokdo islets,” explained Park.

Park also found that the fishermen from Yeosu had transmitted seeds of Japanese spindle to the Dokdo islets in the 1990s. He also published in a science journal that Sedum takesimense nakai was transported by sea tides from Ulleung Island to the Dokdo islets.

In 2009, the government started supporting Park’s research. The Daegu branch of the Ministry of Environment and the National Research Foundation of Korea, which operates under the auspices of the Ministry of Science and Technology, as well as the National Institute of Biological Resources, together provide 50 million won ($42,900) every year.

Recently, Park has been busy locating the place of origin of New Zealand spinach, a type of perennial, on the Dong Island of the Dokdo islets.

Park is planning to form a research team and visit cities in southern Korea to continue his study of New Zealand spinach on the Dokdo islets.

“I will find the place of origins of the remaining 50 plant species on the Dokdo islets,” said Park.