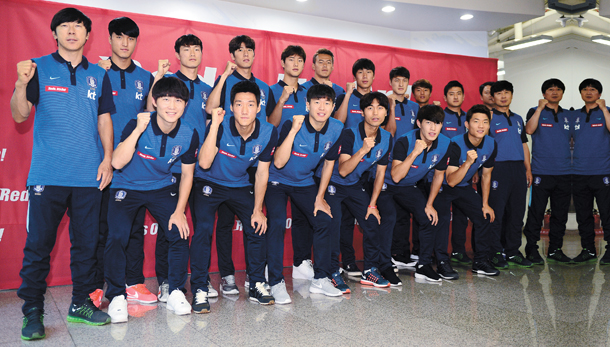 Korean Olympics football squad poses for photo during a press conference last week. Despite the fierce competition, the players see themselves as partners, not rivals. [NEWSIS]

The Korean football squad for the Olympics in Rio de Janeiro is set, but this doesn’t mean starting positions are guaranteed. In fact, the competition for starting spots is quite fierce, especially now that three wild cards have been decided. Yet, the players themselves see each other as partners who are working together to improve their games instead of rivals to overcome and defeat for playing time.

In every position for the Olympic football team, be it forward, midfielder, defender or goalkeeper, there are at least two players who are vying for the starting job. Between the two, one will be spending most of his time out in the pitch, while the other will have to remain in the technical area most of the time. Of course, players want to see themselves on the football pitch, rather than sitting on the bench waiting to be substituted into the match.

Two old friends are competing for the starting goalkeeping position; Gu Sung-yun of the Consadole Sapporo and Kim Dong-jun of the Seongnam FC, whose relationship was evident when they spoke of each other. “I was taken aback when I first met Gu,” said Kim. “He was quick and agile and yet he was big. We stay in touch and are good friends. This is my first year in pro and I often call him up for advice.”

Gu expressed a similar sentiment. “I am glad that Kim is doing well on his team,” Kim said. “When he called me up saying, ‘Things are tough,’ I told him to just enjoy it while he can.

“We are rivals but there is no need of hiding this,” said Kim. “We can help each other by communicating and discussing our plays.”

Gu added, “We go together and I hope we come back with a medal.”

Park Yong-woo of the FC Seoul and Lee Chan-dong of Gwangju FC are in a contest for the starting spot as defensive midfielder.

Lee was a key midfielder for Shin Tae-yong, the manager of the Olympics team. However, just when he thought he has guaranteed his spot, a foot injury took him out of several matches. Then came Park, who turned out to be as good of a ball handler as Lee. After Lee returned from the injury, the two have been rivals for the defensive midfield position. However, Lee and Park begged to differ.

“Park played great while I was absent,” Lee said. “But I am not bothered by it. I don’t consider him as my rival. We play in completely different styles. I hope we as a team do well in the Olympics and that is more important than anything else.”

Park agreed. “I am an intruder here and I was often compared with Lee,” Park also said. “I also don’t consider Lee as my rival. We are partners. We work together for a common goal, the Olympic medal.”

Suwon Samsung Bluewings’ Kwon Chang-hoon has been the ace of the U-23 national team under Shin. But, he finally has met his challenge, Son Heung-min of Tottenham Hotspur. Son Heung-min, who turned 24 last week, is joining the Olympics team as a wild card, a system in the Olympic football tournament that allows up to three players older than 23 to play in otherwise 23-and-under competition. Kwon and Son both play at the right flank.

Even so, Kwon is nonchalant. This is because his focus is not about securing his starting position but is about being a valuable asset to the team. “My position overlaps with Son and I am well aware of this,” said Kwon. “What is more important is the team winning matches. We will compete in good faith but if I am given a different assignment for the team, I will take it.”

On the defensive side, Song Ju-hun of Mito Hollyhock, Jung Seung-hyun of Ulsan Hyundai FC and Choi Kyu-baek of the Jeonbuk Hyundai Motors are competing for the starting lineup as another wild card, Jang Hyun-soo of Guangzhou R&F, has joined the team.

Although Jang is a multiplayer, capable of filling several positions, it is likely he will play a central defender to bolster the team’s defense.

“Whoever plays in the game [alongside Jang], we will cheer for him,” said Jung. “Those who are at the bench have an important job to do as well and it is to keep the fighting spirit of the team alive.”

“All of us defenders will work together with Jang so no one will question our defensive capability,” added Choi. Song agreed that the team has a united goal. “Our goal is a medal and we will work together strategically. Even if we don’t play in the game, we all have a job to do.”