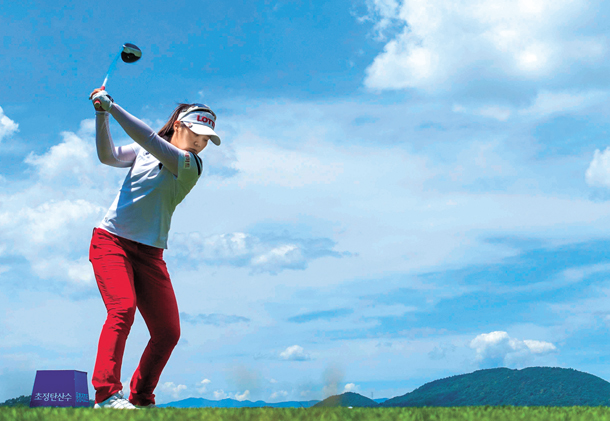 Vying for the title against 136 pro golfers, the first-year KLPGA pro went 9-under 207 by Sunday to top the leaderboard.

After finishing the first day on Friday tied at 15th, Lee quickly climbed up the leaderboard on Saturday with seven birdies.

Lee maintained her position the next day, shooting 1-under 71 with four birdies and three bogeys. 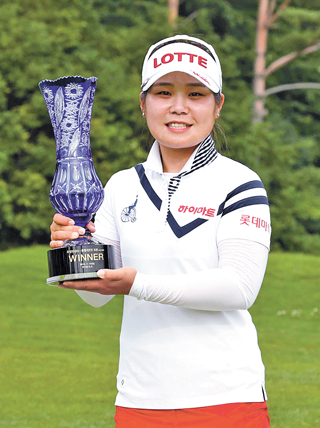 Lee So-young, 19, shows off her trophy after taking her first career win at the ChoJung Sparkling Water YongPyong Resort Open on Sunday. [KLPGA]

The latter half of the day after the 10th hole, Lee secured the win. At par-3 12th hole, the young golfer showed the tenacity and control of a veteran, landing the tee shot right on the green in the short course without making an error. After parring the 12th, she added another par at the 13th hole. She roughed her tee shot initially but avoided the bunker and eventually landed her second shot near the pin. She showed off her tactical prowess as if she was a veteran of the game, looking to land the ball on the green when in a pinch rather than trying to put the ball as near to the pin as possible.

The par-4 14th hole was the deal breaker. During her approach shot after tee shot, she landed the ball to the right side of the pin. It was going to be a difficult birdie putt since she had to calculate in the downhill course from where her ball was to the hole. But, as she nailed the birdie putt, the gallery went wild and her lead was widened to three strokes. This birdie put pressure on runners-up such as Park Gyeol who were left with no choice but to push ahead with risky shots if they were to have any shot at winning the event.

Although Lee’s lead was narrowed to two strokes when she bogeyed the 17th hole, other golfers were unable to catch up.

The long-waited win by a rookie was also celebrated by other KLPGA golfers, who congratulated the young golfer by spraying sparkling water on her after she putted in her final shot.

“I was just trying to stick to my management plan and I think I did just that,” said Lee during the winner’s interview.

“I would like this win to be a milestone this year in my run to win the rookie of the year award,” Lee added. “I am happy to win a title in the first half of the season and I would like to add another win in the second half.”

Lee has finished within the top 10 on four occasions this season, which allowed her to aggregate 990 points in the rookie of the year category. Sunday’s win is expected to bolster Lee’s shot at the award as it adds 180 points to the scoreboard.