Reuters shows the power of images

Reuters shows the power of images 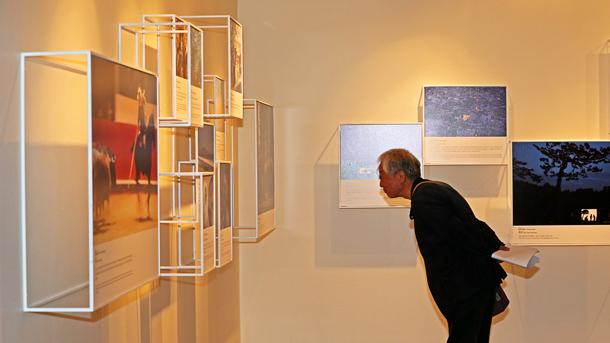 A visitor looks at a photograph displayed at the “Reuters, Our World Now” exhibition, currently being held at Hangaram Museum, Seoul Arts Center. A total of 450 photos taken by Reuters photojournalists are on display. [HANKYOREH]

At a time when it’s easier than ever to take a picture, it’s worth being reminded how powerful photography can be.

Photographs can expose us to the harsh realities of war-torn cities, illuminate the joy of triumph at events like the Olympic Games or simply make us take a closer look at our daily lives.

The power of the medium is evident at the “Reuters, Our World Now” exhibition at Hangaram Museum, Seoul Arts Center, until Sept. 25.

The show is a collection of images taken by photojournalists at Reuters, one of the largest news agencies in the world, along with the U.S.-based Associated Press and France’s Agence France-Presse.

Some 450 pieces are on display, selected from more than 13 million pictures from Reuters’ archives and 1,600 recent pictures collected from 600 current photojournalists at the agency, the exhibition’s organizing committee said.

The exhibition consists of six sections.

In the first, “Reuters Classics,” 29 photographs of wars and civil conflicts are displayed with their backstories. Scenes of the First and Second World Wars, Romanian Revolution, dismantlement of the Berlin Wall and the famine in Tahoua, Niger are all on display.

Among the most memorable for Korean audiences will be the famous photograph of 21-year-old student activist Lee Han-yeol, who was hit in the head by a tear gas grenade during a student democratization protest. It is hung in the corner of the first section. 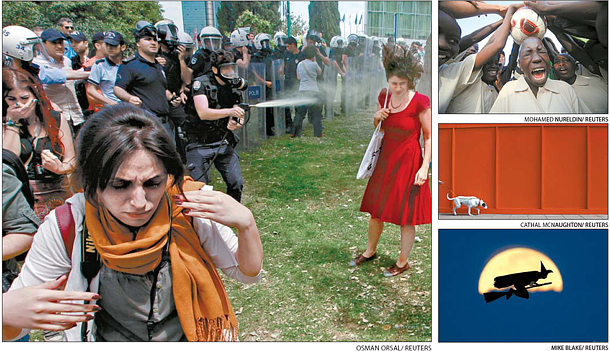 Above: Turkish police spray tear gas on a woman in a red dress, who was protesting to preserve trees in a park. The photograph created a global debate about the treatment of civilians at the hands of police. Top right: A Sudanese boy expresses joy after winning a soccer game.

Another memorable image is Turkish police spraying tear gas on an unarmed woman in a red dress. She was calling for the preservation of trees in a park. The picture, taken by Osman Orsal in 2013, aroused a global debate on the violent treatment of civilians by police.

The second section, “Emotion,” displays 28 moments of highs and lows. One of the most moving shows the ecstatic joy of a child in Sudan after a victory by his soccer team, taken by Mohamed Nureldin Abdallah.

The third section, “Unique,” shows distinctively beautiful and bold fine-arts photographs. They are displayed in an all-white room adorned simply with a mirror. The section is the only one where visitors themselves can take pictures.

“Travel on Earth” and “Reality,” the fourth and fifth sections, transport viewers to locations both exotic and everyday.

The last section, “Spotlight,” concludes the exhibition by displaying photographs that draw attention to contemporary social issues like global warming and political oppression in North Korea.

The exhibition leaves viewers with a sense that photographs can do more than they imagined possible, and encourages a reconsideration of the role the medium can - and should - play in their lives.