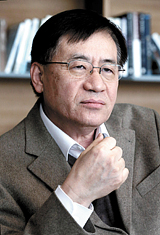 Korea might lose its voice in the China-led Asia Infrastructure Investment Bank (AIIB) after the Korean vice president of the bank, Hong Ky-ttack, disappeared after being implicated in a fraud scandal.

According to the AIIB on Friday, it will recruit a new vice president after Hong, former chairman of Korea Development Bank (KDB), suddenly took a leave for six months and disappeared. He has been in the job for six months.

The AIIB didn’t say whether the new vice president will be Korean or not.

Hong, 64, is embroiled in a scandal over cooked books at Daewoo Shipbuilding & Marine Engineering (DSME) and the financial aid given the company by the KDB.

Hong revealed to the media last month that the KDB’s acceptance of falsified profit and loss statements by DSME was not its independent decision but a plan decided upon by ministers at confidential meetings in the West Wing of the Blue House. Hong served as KDB Chairman from April 2013 to Feb. 2016.

Nam Sang-tae and Ko Jae-ho, former CEOs of the shipbuilder, were summoned by prosecutors to answer questions about accounting fraud last month and earlier this month. Ko was arrested on July 9.

Hong snagged one of the five vice president positions at the AIIB in February despite criticism and suspicions about his appointment. His appointments to both the AIIB vice president and KDB were criticized as a political appointment stemming from his support of President Park Geun-hye. A fellow alumnus of Sogang University, he served as professor of economics at Chung-Ang University before the Park administration named him a member of its transition committee in 2013.

Hong’s position at the AIIB was vice president of risk management. The AIIB has demoted the position to director general level and is recruiting a new person to fill it up. It has posted a recruitment notice for a new vice president of finance.

Since Korea is the fifth-largest stakeholder in the China-led institution that was officially launched on Jan. 16 - it has a 3.81 percent stake worth about 4 trillion won ($3.4 billion) - there have been expectations that a Korean should play a significant role in the institution to protect the national interest.

The Ministry of Strategy and Finance said in a press release on Saturday that the AIIB has four openings including the finance vice president. It did not mention why the AIIB has opened the recruitment.

“The ministry will do its best to support the appointment of a Korean figure for the positions,” it said. “It is not true Korea has lost the vice president position.”

Media speculated that deployment of a U.S. defense system on the Korean peninsula, which China objects to, might affect the AIIB’s recruitment decision, but the ministry denied the reports.