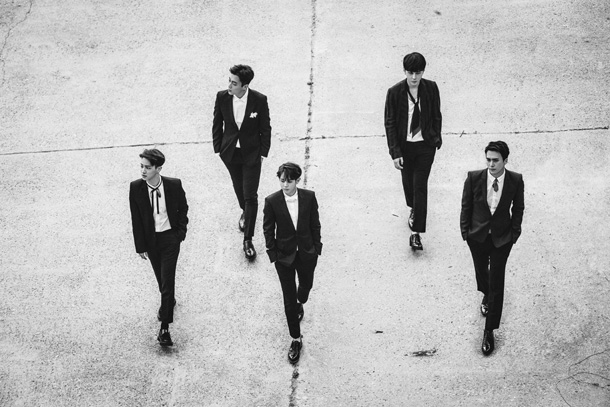 A popular K-pop boy group Beast that has been on a roll since its debut seven years ago recently went through a transition.

One of its members, Jang Hyun-seung, who was a lead vocalist in the group decided to leave, allegedly because of his wish to pursue a different music style. The rest of the boys had to let him go last April.

The group says that it was difficult to let him go, but understandable. The five-member Beast quickly got back on its feet and released its third regular album “Highlight” last week.

The boys even went a step further and established a producing team called “Good Life” under the leadership of Yong Joon-hyung, the group’s rapper. Four others - Lee Gi-kwang, Yang Yo-seob, Yoon Doo-joon and Son Dong-woon - also wrote some of the songs on the new album.

Unlike their previous releases that were heavily filled with dance music, it seems like Beast has calmed down a little, coming up with more ballads for its latest album. They’ve picked two songs - “Butterfly” and “Ribbon” - in the 12-track album as title tracks and both are ballads.

To hear more about the group’s new journey as a five-member group and their latest album, Ilgan Sports, an affiliate of the Korea JoongAng Daily recently sat down with Beast for an interview. Here are some excerpts.

Q. It’s been three months since Jang’s departure. What’s it like to have one member out of the group after seven years of working together?

A. Yoon: Six of us have been together for many years so honestly, it still feels a bit weird to have only five of us. I can’t imagine how weird it will be for our fans. To make sure they don’t feel something’s missing, we must work harder, I guess.

Lee: Because we have one member missing, it felt like there’s more part in a song that each of us has to cover. The stage will also look a little empty so we’ll have to work on making it look whole.

Can you elaborate on Jang’s departure?

Yang: The decision to leave the group wasn’t totally Hyun-seung’s. He came up with the thought and we all discussed it together. In the end, we all agreed that it’ll be better to work as musicians separately, but still support each other. Our agency also often told us that Hyun-seung tends to pursue different musical styles than rest of the members. We finally acknowledged our differences, although it took some time for us to do so. After all, we think it was a wise decision for both Hyun-seung and us.

Did you manage to find a positive side to having one less member?

Lee: Well, I guess we are spending less money on food (laughs). Also, our van became more spacious as well.

How do you plan to make up for the loss?

Lee: Hyun-seung was a lead vocal and a great dancer. If the rest of us fail to fill that space, we think the fans will feel like there’s a lot missing in Beast since it became a five-member group. We’ve always put all our efforts into our previous albums but especially for this one, we decided to try harder. Each of us really worked on this album from scratch so we have more affection toward it.

What’s the story behind naming your album “Highlight”?

Yong: We didn’t come up with the title first then work on producing the album. After all the songs were written and compiled, we thought about how to label it. Through the songs in the album, we wanted to deliver a message that this very moment, which is the youth of one’s life, should be the “highlight” in everyone’s life and that every moment should be treasured.

Your songs tend to win a lot of sympathy from the listeners. Do you always try to write songs that sympathize with many people?

Yong: I watch a lot of movies and television drama series. I’m not that fond of books but I also sometimes read books when I don’t have any ideas. I also like to talk to a lot of friends and listen to their worries and anything that’s in their thoughts. I think it helps me when writing lyrics that can speak to many people.

The contract with your current agency Cube Entertainment ends in October for Beast. Are you all resigning with the agency and continuing on as Beast?

Yong: It many sound irresponsible but all of us avoid talking about something serious or complex issues. We all know that the time is approaching but we are not really talking about it that much.

I think ever since Hyung-seung left, we only thought about working on our new album and currently, all our minds are in staging concerts and promoting our new songs. If we are somewhat done with it, then, we may talk about resigning or something. Then, whether we like it or not, the members will have to sit down and wipe the grin off our faces and discuss about such issues and talk to the agency as well.

What kind of Beast are you hoping to show from now on?

Yoon: I don’t want people to feel that the Beast has had its day and it’s old school. I think we have enough experience as an idol group and that we are able to show our distinct characteristics among other boy groups out there.