Korean bio start-ups are benefitting from Chinese capital flooding into the Korean market.

“By selling generic drugs in the past, Chinese pharmaceutical companies have gained immense capital and are investing heavily in Korean and American bio start-ups,” said Lee Jung-gyu, CEO of Bridge Biotherapeutics. 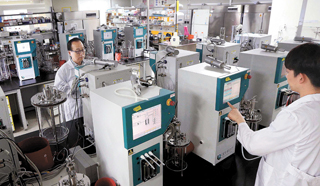 Big global pharmaceutical companies are battling to invest in China. About ten years ago, China had only five major pharmaceutical research & development (R&D) centers but there are over 30 today. On July 2, Novartis, the current leader of the global medicine market, opened a new $1 billion R&D campus in Shanghai.

China is the world’s second largest drug market, with sales of $115.2 billion. The big companies are not focusing on this fact alone; they are also attracted by the fact that China produces 30,000 new medical doctors and 2.5 million college graduates with masters and doctoral degrees in natural sciences every year.

The United States and Switzerland are the traditional powerhouses in the market, but China is catching up. The global medicine market is worth a $862 billion, more than the automobile and semiconductor industries.

Korea does not have many world-class pharmaceutical companies. Celltrion, Hanmi Pharmaceuticals and Samsung Bioepis are showing progress but other Korean companies are struggling. Korea lacks entrepreneurial college graduates with degrees in natural sciences and experts with experience in the global pharmaceutical business.

“Pharmaceutical companies in Korea currently lack an industrial ecosystem base,” said Lee Jae-hyun, a professor at the School of Pharmacy of Sungkyunkwan University.

In 2000, there were 233 pharmaceutical start-up companies that were supposed to form the ecosystem base, but that number diminished to two by 2013.

Big global pharmaceutical companies have little interest in the Korean medicine market. France’s Sanofi is the only foreign company that has a laboratory in Korea. While foreign companies frequently conduct clinical tests in Korea, they rarely choose Korean companies to jointly develop new drugs. Janssen Korea and Bayer are the only overseas companies to have production facilities in Korea.

In addition, foreign companies are unwilling to invest in Korea because of its unfavorable pharmaceutical pricing policies and tax systems when compared to China and Singapore.

While the Korean pharmaceutical market is fading, the Chinese market has become increasingly lucrative.

Experts argue that in order for Korea to have successful companies like Hanmi, it needs a dramatic increase in investment in the domestic pharmaceutical industry. Korea needs a system in which entrepreneurs receive financial support from pharmaceutical organizations to test their products and a platform on which the entrepreneurs can cooperate with researchers. When bio start-ups are first set up, they lack private investments and the government needs to provide financial support until they can flourish. There would be numerous benefits from a vibrant pharmaceutical industry because employment opportunities will naturally rise.

“Support for start-ups and improvements in our systems are essential for our pharmaceutical and bio-health industries,” said Seo Jeong-sun, President of the Korea Biotechnology Industry Organization.

In fact, on May 13, a pharmaceutical company was found guilty of sending kickbacks worth 5.6 billion won to hospitals and clinics in return for them prescribing its medicine. Less than a month later, prosecutors arrested 491 people, including doctors, and accused them of prescribing medicine in return for kickbacks worth 4.5 billion won from another pharmaceutical company’s staff and executives.

In a domestic drug market worth a little more than 19 trillion won, 148 of the 307 companies selling finished medicine have less than 10 billion won in annual sales. Due to their small size, it is crucial that doctors prescribe their products if they are to survive. 81 domestic pharmaceutical companies listed on the stock exchange incur operating costs up to 34 percent of sales revenue, four times more than their research and development costs. This means that they have difficulty placing new products in the market and they struggle to be creative.

Due to this unfavorable market situation, only a fraction of pharmaceutical companies spend trillions of won in decade-long drug developments. According to the Korea Health Industry Development Institute, only 18 companies invested over 10 percent of their sales in drug development in 2014.

The global pharmaceutical market is growing in the range of 4 to 7 percent a year as countries’ populations age and the demand for drugs grows. China, the world’s second largest drug market, is attracting capital and talented minds to bio start-ups. China’s largest contract research organization for clinical testing recently recruited a Harvard professor for its bio start-up. Last year, investment in Chinese health care start-ups totaled more than 4 trillion won, while the equivalent figure in Korea was a mere 313.7 billion won.

To develop the pharmaceutical industry, R&D centers are crucial. By establishing an R&D center, pharmaceutical companies of all sizes show interest in the market, and the industry can benefit from a specialized work force as well as the input of industrial knowledge.

“It is for the above reasons that attracting R&D centers is so competitive between countries,” Song Young-joo, Director of Corporate and Government Affairs at Johnson & Johnson Korea, said. “The establishment of a few R&D centers will cause a snowball effect whereby the bio industry becomes a better environment for pharmaceutical companies.”

To compete in the competitive global pharmaceutical market, Singapore has imposed a relatively low corporate tax rate of 17.5 percent and it boasts global companies’ production facilities and R&D centers, forming a bio cluster. China is using its enormous market size, while Japan is using its strength in science education to compete.

Although Korean university hospitals are equipped with formidable treatment and research forces, its bio industry ecosystem is not as advanced when compared to those of other countries, discouraging global companies from doing business in Korea. Foreign companies are also not impressed by the fact that the government seems reluctant to acknowledge that new medicine has innovative potential.

Korea also lacks a specialized labor force with experience in drug development and commercialization. It lacks experts who can plan an R&D project and have experience in clinical research, licensing, good manufacturing practice and product managing that would lure the attention of global companies. In fact, there are only 50 Koreans who have experience working in a global pharmaceutical company.

“The Korean pharmaceutical industry currently lacks global companies and in this difficult situation, it is important to implement a policy whereby we attract global companies and grow our talents, even if it means offering a wide variety of benefits,” said Bae Sung-yoon, professor at the Department of Management of Inje University.

Open Innovation, the process by which large companies use technology and industrial knowledge from exterior sources when researching and commercializing new products, is causing a stir in the domestic pharmaceutical market.

Hanmi declared that it would search the globe for the right start-ups and in the domestic market, it is currently researching artificial antibody platform technology with bio start-up Repugen. Meanwhile, Green Cross is developing drugs to cure long-term anemia with bio start-up Genexine.

The effects of Open Innovation arise from using technology exports as a link between different sectors of an industry to form a vibrant ecosystem base.

Pharmaceutical companies purchase the technology for new medicine developed by bio start-ups, then domestic and foreign conglomerates buy the technology after the medicine passes clinical tests. Since many domestic companies cannot afford the costs of global clinical testing, exporting is a popular choice among Korean companies. The Korean pharmaceutical market accounts for only 1.8 percent of the global market, so the overseas market presents greater opportunities. Of the 27 new domestic drugs released last year, only 6 managed to record production worth over 10 billion won.

The current market situation has led to a bio start-up specializing in exporting technology. Qurient Therapeutics purchases potential substances for new drugs, conducts clinical tests up to the second round, then sells them for profit. It develops new drugs without expensive research facilities. Qurient’s main quality is that it presents an opportunity for development for promising domestic and overseas start-ups.

“Qurient’s business model is one that combines the inefficient models of a large company that has reached its limits and a bio start-up that spends all of its investments on experiment equipment,” said Nam Ki-yean, CEO of Qurient.

For Open Innovation to succeed, one needs to be aware of global research and business trends. In 2009, SK Chemicals exported its new medicine to treat hemophilia to Australian pharmaceutical company CSL, which was released as AFSTYLA. This export was successful due to a nine-year effort by Kim Hoon-taek, head of SK Chemicals’ Innovation R&D Center, and four other researchers.

“Hemophilia medicine is worth billions of won per gram, so it is a high value product and we are aiming to make a hit in the overseas market,” Kim said. “After exporting our technology, we learned a lot about what the global standard is and how we should use R&D.”

Global pharmaceutical companies are constantly investing in companies that promote innovation. Sanofi, the world’s fifth largest pharmaceutical company, works jointly with other companies in 60 percent of its medicine development projects. It is known for searching around the globe to find promising bio start-ups and carrying out joint research.

“It is impossible to research by one’s self and find success nowadays,” said Lee Seung-joo, Head of R&D at Sanofi. “There needs to be a good business platform full of bio start-ups to attract domestic and foreign major bio companies that develop new drugs.”