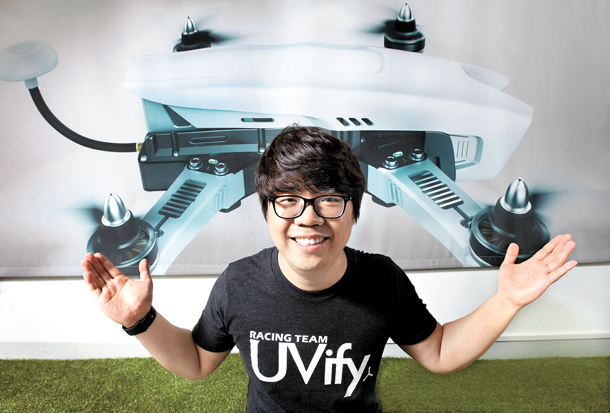 The basement of a building a mile away from Seoul National University in western Seoul has been turned into a high-ceilinged office. In front of a shelf crowded with over 100 drones from producers around the world, a hula hoop hangs from the ceiling.

The hula hoop is used to test the drone’s ability to fly with precision.

The space used to be home to an indoor driving range for golfers. Now it’s the Korean home of UVify, a drone start-up that is about to begin mass production of its first drone. Sales will commence in October, two years and seven months after the company was established. UVify is a portmanteau of the abbreviation for unmanned vehicle and the suffix “ify.”

Even though drones have become common enough to be sold at department stores or to be spotted flying above the Han River, many drone producers fail to delve seriously into the core technologies, says the entrepreneur, who is also a mechanical engineering and aerospace Ph.D. And that tendency inevitably limits many drones’ ability and performance.

“Drones are not an entirely new product even though their commercial history is only a couple of years old,” Lim said in an interview at his office last Tuesday. (China’s DJI, the world’s top drone producer, debuted its signature Phantom in January 2013.) “Drones are an evolved form of components in radio controlled (RC) airplanes combined with sensors in mobile phones. That’s why many companies have yet to figure out what parts need to be modified or complemented for drones to function better. We decided to develop ours from the scratch.”

He brought up Tesla Motors as a role model.

“When people thought no disruptive automaker could be born, Tesla came up with a new type of electric vehicle after taking into deep consideration user behavior and refusing to compromise quality for price. I want to challenge the market with an entirely new drone product, not just a flying object that carries a camera.” 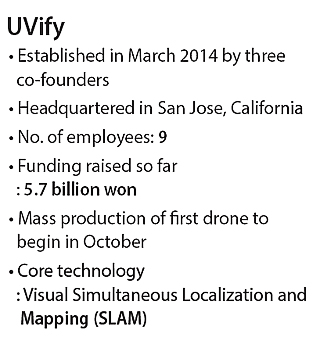 Thanks to such efforts “to think different,” UVify’s flying vehicles can autonomously track an object within its vision - indoors, in particular, where GPS normally doesn’t work well. When scaled down, they can function as moving closed-circuit TVs, facilitating monitoring of a limited indoor area, Lim explained. The drones are also capable of returning to an original location set in advance even if an external power such as wind misplaces them, and of moving to a designated location on their own.

Under the worst-case scenario of GPS signals blacking out or jamming, which can actually happen anywhere and anytime, his drones remain unaffected, Lim claims. Also, they can flip around and rotate freely at rapid speed, producing much more dynamic video. By comparison, most drones are optimized for shooting video either horizontally or vertically - with stable shots as the top priority. UVify machines’ light weight - at 500 grams, they are nearly half the weight of other drones of similar size - give them upgraded agility.

Before launching UVify in 2014, Lim spent over 10 years studying robotics and unmanned vehicles to earn a doctorate degree at Seoul National University. He briefly worked as an intern and visiting researcher across the United States, China and Australia including at the Microsoft Research Lab in Beijing.

“I was interested in developing computer vision-based autopilot robots as an undergraduate. But after reaching a certain stage of development over the course of my research at graduate school, I reached a breaking point,” he said. “The robots I could realistically create were different than what I had imagined. They turned out to be too slow and simple in shape. So I shifted my attention to a machine that flies and I fell in love with drone development ever since.”

He and two other co-founders - laboratory colleagues during his doctorate course - started out with a loan of just 150 million won ($129,383). The other founders are Chief Technology Officer and Chief Operating Officer of the company.

Around the same period, UVify raised a combined 600 million won from the Small & Medium Business Administration and the Korea Institute of Startup & Entrepreneurship Development, both state-run agencies.

At the beginning of this year, NCSOFT, the country’s third-largest online game developer, invested 4.8 billion won in UVify for a 30 percent stake. 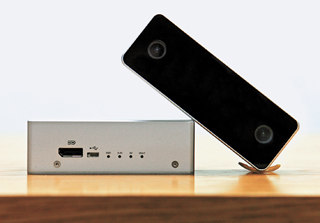 A camera for autopilot cars, right, and a computer that processes the images. [PARK SANG-MOON]

The funding is “part of our investment in future technology, and we think drones have great potential to grow into a new game device,” said an executive at the NCSOFT’s investment division.

With the global market in mind from the start, UVify has been running on a dual office system. The company is headquartered in San Jose, California, which is responsible for software and business development. The Seoul office is devoted to hardware and design. Five engineers, including Lim, two designers and two business developers, go back and forth between San Jose and Seoul whenever needed. The company also participated in the Consumer Electronics Show in Las Vegas in January. It was one of 27 drone exhibitors.

The strategy seems to be working. Half of the inquiries about business deals and partnerships with UVify come from outside of Korea, he says.

The company will spend the next three months testing the product before mass production and take advantage of global crowd-funding platforms such as Kickstarter and IndieGoGo for sales, starting in October. The first drone, to be equipped with a 250 millimeters of wheelbase, will carry a price tag of $500. Detailed specs are not available yet.

“It’s true that we have a large amount of funding but we don’t want to spend it on developing,” he said. “Crowd-funding will be a nice marketing tool for us as well as a test bed for gauging who is going to be our key customers.”

The technologies that UVify owns won’t be limited to drones and Lim hopes to ultimately expand the business scope to “unmanning” every vehicle out there.

In a related move, the company is developing key components for unmanned vehicles - a box-shaped two-lens camera and a miniature computer to process the image.

“Korean automakers are deemed to have reached an autopilot-developing stage where cars are able to recognize their location and change lanes,” he said. “Our technology can make up for the loopholes originating from self-driving technologies relying on laser sensors.”