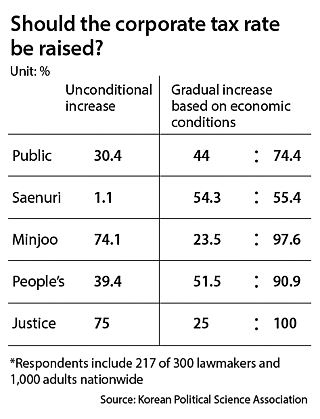 Over half of Saenuri lawmakers polled believe the corporate tax rate should be raised, as opposed to the Park Geun-hye administration, which feels it should be keep at the current 22 percent rate.

In the name of “business-friendly” politics, former President Lee Myung-bak of the Saenuri Party lowered the corporate tax rate from 25 to 22 percent in 2008 for companies with taxable profits exceeding 50 billion won ($42.8 million).

A total of 54 percent of respondents from the Saenuri Party said the tax rate should be gradually increased based on economic factors. This indicates a shift within the party toward liberalism, possibly in response to the public’s growing anger over perceived economic disparity and injustice. Only 1 percent said the rate should be increased no matter what.

“The corporate tax rate must be raised in order to transform our economic structure,” said Saenuri Rep. Choung Tae-ok, who represents a Daegu district, “To meet growing demands for welfare benefits, we have to implement higher taxes.”

By contrast, 97.6 percent of respondents from the Minjoo Party of Korea expressed support for the tax increase, with 74 percent saying it is a must, no matter what, and 24 percent saying economic conditions should be considered. Restoring the rate to 25 percent was one of the Minjoo Party’s primary campaign pledges during the recent April 13 general election.

As for the People’s Party, 52 percent of lawmakers polled support a gradual increase based on economic conditions while 39 percent support an absolute increase.

Two Saenuri heavyweights, former chief Kim Moo-sung and floor leader Yoo Seong-min, responded that a gradual tax increase based on economic conditions would be a good thing. They are both expected to bid for presidential nominations next year.

Two other heavyweights also expected to make presidential bids next year, former Minjoo chairman Moon Jae-in and South Chungcheong Governor Ahn Hee-jung, abstained from the poll as they are not incumbent lawmakers.

A total of 217 out of 300 lawmakers participated in the poll, which was conducted by the JoongAng Ilbo and the Korean Political Science Association.

Each lawmaker’s political ideology was ranked on a scale from 0 to 10, with a score below 4 indicating liberalism and a score above 6 indicating conservatism. The average score of respondents on the ideology spectrum was 3.5.

“The 3.5 average score is the result of having fewer Saenuri lawmakers and more lawmakers who are liberal when it comes to issues like free day care benefits,” said Han Jung-hoon, a professor at the Graduate School of International Studies at Seoul National University.

One issue that clearly separated Saenuri lawmakers from Minjoo lawmakers was that of the Park Geun-hye government’s hawkish stance on North Korea.

When asked whether they agreed with the government’s decision to shut down the Kaesong Industrial Complex earlier this year, in line with international sanctions against Pyongyang for its fourth nuclear test, 92 percent of Saenuri Party respondents answered “yes.”

As for the Minjoo Party, 61 percent of respondents called for the immediate re-opening of the complex for the sake of inter-Korea cooperation, and 37 percent called the decision inappropriate because Seoul must keep communication channels open in order to dissuade Pyongyang from acting out.

The public appeared more liberal than lawmakers in economic terms, especially with regard to the issue of disparity in working conditions and compensation between salaried and irregular workers.

More than one quarter of the 1,000 adults polled nationwide said all irregular workers should have their status elevated to that of salaried workers, and nearly half of all respondents said there should be more legal measures to improve and protect the working rights of irregular workers.

On the same issue, about 7 percent of lawmakers polled agreed that all irregular workers should become salaried workers, while 82 percent sided with the need for more legal protective measures.