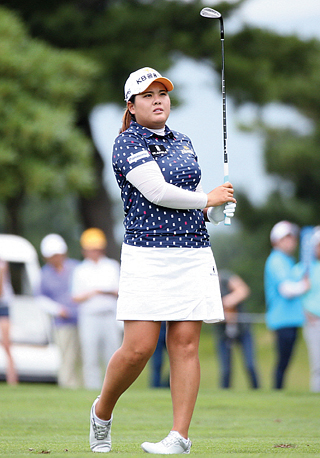 After months of deliberation, Korean golfer Park In-bee announced on Monday that she will compete in the Summer Games at Rio de Janeiro.

Park, whose season has been plagued with back and finger injuries, reached her decision on the final day of which the Olympics roster was to be decided.

The roster was decided based on the Rolex Rankings. The top 15 golfers in the world according to the rankings as of Monday are qualified to compete in the Summer Games this year, where golf is returning for the first time in a century. A maximum of four golfers per country in the top 15 can compete in Rio.
By Monday, six Korean golfers were listed in the top 15 of the Rolex Rankings. Park was the top-ranked among them, placing third in the world despite missing the U.S. Women’s Open over the weekend. She was just behind Lydia Ko of New Zealand and Brooke Henderson of Canada, who were ranked No. 1 and No. 2 in the Rolex Rankings.

Park will be representing Korea in the Olympics alongside world No. 5 Kim Sei-young, No. 6 Amy Yang and No. 8 Chun In-gee.

Other Korean golfers in the top 15 could not turn things around in time to join Team Korea. Jang Ha-na, ranked No. 10, finished 21st during the U.S. Women’s Open, and Ryu So-yeon, ranked No. 12, came in 11th at the event.

Park’s decision to compete in the Olympics comes as she is battling a left thumb injury.

“Going to the Olympics has been my dream and goal for a long time,” Park said on Monday. “I have always been determined to play in the Olympics, but given that it is an event where I will have to represent my country, I could not neglect my physical condition.”

Park, who was recently inducted into the LPGA Hall of Fame after this year’s KPMG Women’s PGA Championship, is expected to take some time off before the Summer Games in Rio, which begin on Aug. 5. She will miss the LPGA UL International Crown, a biennial competition with four golfers representing eight nations, taking place in Chicago next week.

“I have been meticulous and careful about my physical condition for the past month since the KPMG Women’s PGA Championship,” she said. “I have been concentrating on rehab and practice. The injury on my left thumb has healed quite a bit. I have about a month left before the Olympics. I want to make sure I am in my peak physical condition so I can come out with good result.”

Park’s decision was welcomed by Pak Se-ri, the head coach of the Korean squad.

“I felt relieved to hear that Park will participate in the Olympics,” Pak said after hearing the announcement.

“The result from the Games is important, and having her on the team will greatly boost the team.”

For men’s golf, Kim Kyung-tae, ranked 41st in the world and second among Koreans, has pulled out of the team, citing concerns about the Zika virus.