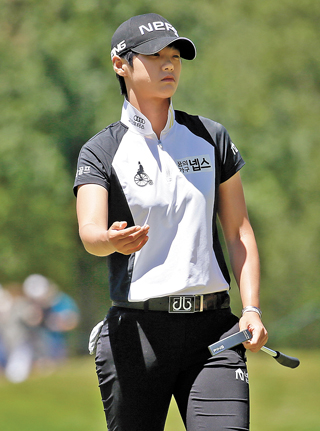 Park Sung-hyun of Korea wrapped up her second LPGA majors appearance this season by finishing third at the U.S. Women’s Open on Monday.

During the U.S. Women’s Open that took place at Cordevalle in San Martin, California, the 23-year-old, who has yet to claim LPGA membership, seemed unfazed, boasting her powerful drivers, which averaged 265 yards during the four rounds. Park even vaulted to the top of the leaderboard at the U.S.-based tour event after its second day, firing seven birdies in a 6-under par 66 to grab a two-shot lead.

She went 2-over 74 on the last day to conclude the tournament at 4-under 284. She was tied at third alongside her compatriots Amy Yang and Ji Eun-hee as well as Lydia Ko, who’s ranked first in the world.

At the beginning of the final round, the 36-hole leader Park was assigned in the group with the 54-hole leader Ko and Ji, who was tied at second with Park after the third round. It seemed like the winner of the tournament was going to be one of the three.

However, Park struggled in the final round, bogeying four holes while nabbing only two birdies. Her attempt to reconcile for the poor showing in the 18th hole came up short when her shot fell into the water. One stroke behind Brittany Lang of the United States and Anna Nordqvist of Sweden, Park was unable to advance to the playoff. The playoff, which could have been a three-way if Park joined, became a duel between Lang and Nordqvist.

At the end, it was the 30-year-old American that emerged as the victor to capture her first major title.

After the U.S. Women’s Open, Park climbed two steps in the Rolex Rankings. As of Monday, Park is ranked 16th in the world.

Four of the past six years of the U.S. Women’s Open have been topped by Korean golfers, the latest being Chun In-gee from last year who made a late charge during the final round with three birdies at the final four holes. Chun, who didn’t make the cut this year, won the trophy last year at 8-under par.