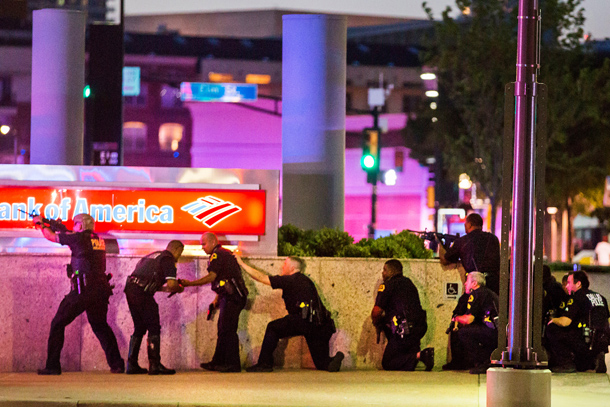 Dallas Police respond after shots were fired at a Black Lives Matter rally in downtown Dallas on July 7, 2016. [AP/NEWSIS]

The shooting of 12 police officers in Dallas on Thursday suggests spiraling violence: The cops were shot during a protest against the shooting of black men by police. A vicious circle of retribution would be something new for the U.S. where, unlike in other developed countries, killings by police far outnumber officer deaths in the line of duty.

The point that police kill more people in the U.S. than in European countries has often been made. It’s intuitively understandable: American cops have to deal with armed criminals more often because guns are more widely available, and the dominant culture is pro-gun, so people have less of a problem using weapons. For all that, however, relatively few officers get killed.

Federal Bureau of Investigation statistics of “justifiable homicide” by law enforcement officers indicate that in 2010-14, the average number of fatal shootings by police was 428 per year (the number has been hovering around 400 for much longer than that). Also according to the FBI, about 50 officers per year are killed in the line of duty. That’s already a rather high ratio of inflicted to suffered casualties — and it disregards the insufficiency of the “justifiable homicide” data; The Washington Post, for example, calculates that a total of 965 people were fatally shot by police in 2015.

In countries where killings of every kind are not as frequent — in fact, so infrequent that it even makes little sense to correct the statistics for factors such as population or number of officers — the ratios are much lower.

In the U.K., a total of 250 officers have been fatally shot since 1945. That’s fewer than four per year. Police, who are usually unarmed, shoot even fewer civilians. Since 1990, they have killed a total of 60 people — a little more than two per year.

In Germany, officers are usually armed. Last year, they shot eight people — about the average number for the last 10 years. Between 1945 and 2011, some 392 German police officers died in the line of duty — about 6 per year, although there have been fewer deaths in recent years.

In France, there’s a dearth of statistics on police killings. By one count, 54 people were killed by officers between 2005 and 2015, about five a year; and between six and 13 officers have died in the line of duty each year in 2008-15.

With absolute numbers so small, it’s difficult to make statistical comparisons with the U.S. Rather, one could say that the killings of and by officers are extraordinary incidents in western Europe, and comparable, small numbers of cops and suspects die at each other’s hands.

What’s at stake in the U.S. is the all-important preservation of police legitimacy — a key concept in today’s criminology concerning trust in law enforcement and the perceived obligation to obey the police. Any diminution would produce a precarious situation.

In the wake of the Dallas shootings, it would be a normal human reaction for U.S. cops to get even tougher, to avenge their fallen comrades. Yet what’s needed is a de-escalation. There will still be crazed criminals who kill cops — but perhaps in time a less violent culture will develop as a basis for strengthened law-enforcement legitimacy.


*The author is a Berlin-based Bloomberg View columnist.