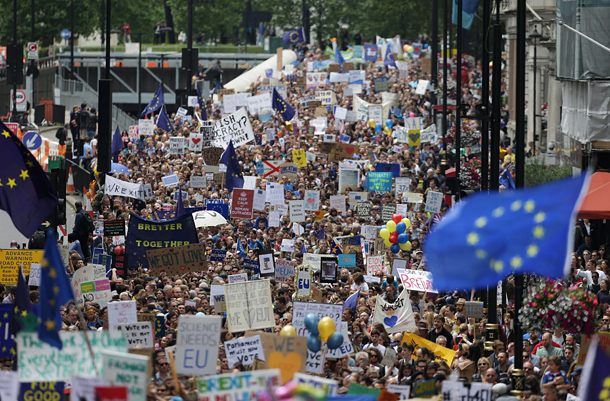 Demonstrators wearing EU flags as capes and with homemade banners saying “Bremain” and “We Love EU” gathered on the streets around Park Lane for the March for Europe rally on July 2. [AP/NEWSIS]

Since June 23, the world has become familiar with the newly coined term, Brexit. The United Kingdom held a national referendum to redefine its 43-year-old relationship with the European Union. The result showed that the British people chose unexpected separation, and the shockwave spread to the major stock and currency markets worldwide. Two weeks after Brexit, the world is getting over the initial shock, while the United Kingdom falls into greater political chaos.

On the surface, Brexit means the United Kingdom withdrawing from the European Union, but its departure has considerable impact on other countries. Brexit will influence politics, foreign policy, security, economy and culture of the United Kingdom and Europe, and countries around the world will be affected directly and indirectly. And it is not limited to plummeting stock market or exchange rate fluctuation. Brexit’s impact is beyond economy, and it may signal a change in direction that the world has been headed until now. Therefore, we need to study what led to Brexit and its meaning in the global sense.

Since 1945, the global economy has been growing based on free market. But we need to pay attention to the fact that the free market system established in 1945 was not completely free but was controlled. By principle, free market was promoted while the market operates within the agreed values of community. Since 1945, complete free market was changed to controlled free market because of the Great Depression in the 1930s, World War II and the Cold War. After World War II, the world agreed to attain prosperity through U.S.-led free trade while domestically achieving complete employment and providing welfare through government to set off damages from free trade. The controlled free trade began to deviate from the control in the 1980s, and globalization bloomed in the 1990s. After the world went through the global financial crisis in 2008, we have arrived at Brexit in 2016.

Brexit is concerning because it may not stop in Britain but would spread to Europe and other regions to encroach on liberal world order. The signs of danger are showing even in the United States, the pinnacle of capitalism. Under the guise of democracy, populist politics met deglobalization sentiment, leading to political isolationism and economic protectionism. Prolonged stagflation is more worrisome than short-term bear market or exchange rate fluctuation.

The solution for polarization aggravated by uncontrolled free market and globalization cannot be anti-globalization and protectionism. Free trade and globalization, which provide incentive to maximize human creativity, have brought prosperity to many countries and people. Korea is one of the beneficiaries. Therefore, an appropriate solution to the instability that the world is going through today can be found from a return to the controlled free market, which maintains free market while alleviating polarization.

To overcome the global financial crisis of 2008, the world cooperated through the G-20 summit and obtained satisfying results to prevent repeating the Great Depression of the 1930s. Therefore, G-20 summit would be the most fitting setup to reestablish the controlled free market for the 21st century. This year’s G-20 summit is to be held in China in early September. Now that the world has experienced the initial chaos of Brexit and detected the long-term danger warned by Brexit, ignoring the issue is not responsible for the 20 largest economies of the world. The G-20 summit in China should reconfirm the promise to defend a free market and liberalist world order and discuss ways to share benefits of the market and resolve polarization. At the crossroads of Brexit, the direction of the world history can be determined by the outcomes of the G-20 summit in September.


*The author is a professor at the Korea National Diplomatic Academy.