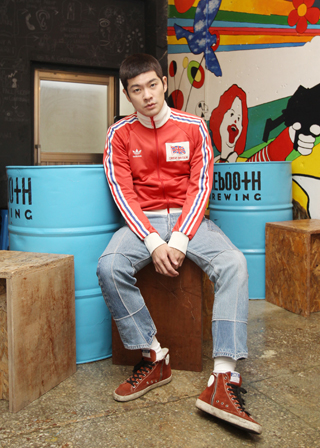 Chang Ki-ha of the indie band Ki-ha and the Faces is not known for love songs. As the title tracks of Chang’s previous albums, such as “Cheap Coffee” and “I Watched TV,” imply, the singer’s lyrics mostly revolve around quotidian topics.

But Chang’s latest album, released last month, touches on themes of romance. “Where’s Someone Who’s Expert at My Love” includes 10 love songs that represent how people can never be fully mature or be prepared when it comes to love.

All of the tracks were written and composed by Chang himself.

Since this is the first time Chang is writing music about love since he debuted in 2008, many are speculating whether the album represents the love story between him and his girlfriend singer IU, whose relationship was officially announced last year.

Chang sat down for an interview with Ilgan Sports, an affiliate of the Korea JoongAng Daily, to talk about his newest album and his relationship with K-pop star IU. Here are some edited excerpts.


Q.The title song for the new album is a love story “Kieuk.” Is the story based on personal experience?

A.First of all, I started working on the song after thinking what kind of music I could make with the Korean letter kieuk, which represents laugh out loud in Korean.

At first I was not sure about the theme because I thought it seemed too much like a joke. But the more I thought about it, the better it seemed.
The track is not based on my love story. Since I do not express my emotions much, I have never undergone such a devastating experience [represented in the song, which revolves around a man who feels devastated after a woman he likes merely responds to him with the letter kieuk]. Although I have not faced such an experience, everyone can at least imagine what kind of feeling the man [in the song] would have.

Why did you pick the letter kieuk?

Your latest album is full of romance.

In the past, I found it highly uncomfortable to directly speak out about love or romance [in my songs]. However, as I got to writing and composing a variety of music, I started thinking that directly talking about love could also be a good idea. And I felt that I could write love songs in my own way that does not sound too cheesy.

Could that be the influence of your romantic relationship [involving IU]?

Since it has not been long since we acknowledged our romance, it seems like many people relate my latest music to our relationship. But that is not the case.

[Regardless of my personal relationship with IU], I think it was about time for me to release an album revolving around love. It took me around a year and a half to complete the album.

The age difference [between you and your girlfriend] is 11 years. Do you feel any generation gap?

Conversely, not all people with the same age necessarily communicate well. There are so many factors that are taken into account when we say that people’s personalities match well. Since age is one of the thousands of those factors, I do not feel that much age gap between us.

Is the subject of your love story her?

Many people have asked whether the subject of my latest songs is IU. However, that is not true. I did not think much [about her] when coming up with the songs.

What do you think drives Ki-ha and the Faces to maintain steady popularity?

Nothing. We just continue doing what we do in the way that we have been doing it so far. I hope we can become a band that will remain as popular as we were when we debuted. Although it may sound easy, it actually isn’t. The older one gets, the more disadvantageous it is for a musician. My goal is to enjoy life.

Do you have any future plans?

These days, every day seems different. Since I do not take part in music programs, I don’t have a hectic schedule. Instead, I recently got to work on five radio programs, so I have been working on the radio.

Our band is also planning to go busking around the nation early next month. Ki-ha and the Faces is a performance band. We are planning to meet a large audience through the upcoming busking.