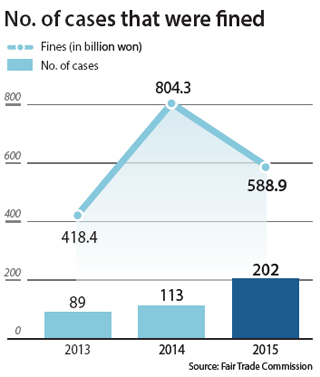 The Fair Trade Commission (FTC), the nation’s antitrust agency, handled 4,367 cases last year, a 7.1 percent increase from the previous year, but the amount of fines it collected dropped 26.7 percent from 2014 to 588.9 billion won ($513 million), according to figures released Monday.

When compared to the previous year, the number of cases that the FTC handled went up by 288, and the number of companies that were fined surged 78.7 percent from 113 in 2014 to 202 the following year.

Such a discrepancy has raised questions as to whether the FTC has been less aggressive in handling cases that violate antitrust laws. The FTC on Monday responded to these reports.

“The reason the number of cases that were turned over [to the prosecutors’ office] and the amount of fines that were levied were partially reduced is because of the nature of the cases that were dealt with in 2015,” the FTC said in a statement. “We are approaching the cases with the will to execute the law with firmness.”

However, this is because in 2014, the cases that the agency studied were serious issues not only in size but also in nature. The agency said certain cases in 2014 involved record-high fines.

In contrast, the cases handled in 2015 mostly involved violations that only required responses such as ordering or advising companies to change their in-house regulations and contracts or business practices, rather than prosecutorial investigation and fines.