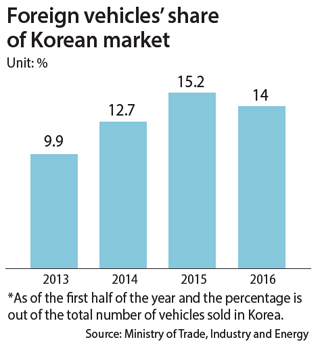 Koreans are less enamored with imported cars, partly because of the Volkswagen emissions-rigging scandal, data from the Korean government shows.

According to the Ministry of Trade, Industry and Energy on Friday, sales of cars in Korea rose 9.1 percent in the first half of this year compared to a year ago, as newly launched models and extended individual consumption tax cuts on vehicles attracted Korean customers.

The government extended a tax cut on vehicles that was supposed to come to an end in December to June to boost domestic consumption. This allowed customers to only pay 3.5 percent in individual consumption tax when they purchase vehicles instead of 5 percent.

In the first half of the year, sales of domestic cars rose 10.6 percent year-on-year.

Sales of foreign automakers in Korea dropped even though they released new models and also benefitted from the tax cuts.

“There were a large number of models launched and foreign automakers ran various promotions to attract local customers but Volkswagen’s emissions-rigging scandal and tighter regulations for people registering vehicles for business use dragged down the figure,” said Lee Won-joo, a director at the Trade Ministry.

Volkswagen’s sales in Korea dropped significantly. Accumulated sales by the automaker for the first six months of the year plummeted 33.1 percent year-on-year, according to the Korea Automobile Importers and Distributors Association last week. The association said it was the biggest decline among imported car brands in Korea.

Volkswagen has gotten particularly withering press in Korea for agreeing to pay up to $15 billion for compensation to customers in the United States but not coming up with a concrete recall plan in Korea.

Volkswagen Group’s luxury brand Audi tumbled by 10.3 percent in the first half of this year.

Domestic cars performed very well. Sales of Hyundai Motor rose 11.4 percent as sales of Avante and Tucson went up. The Avante was the most popular model sold in Korea during the first half of this year.

Meanwhile, the number of vehicles manufactured and exported dropped during the same period as emerging markets’ economies slowed

“Exports to emerging countries such as those in Middle East, Central and South America and Africa dropped significantly,” Lee at the Trade Ministry said.

Hyundai Motor’s exports fell 16.6 percent and Kia Motors’ dropped 15.1 percent. According to the Trade Ministry, sales of Hyundai’s Tuscon and Sonata rose overseas, while sales of the Accent, Avante and Santa Fe dropped.

Exports of auto parts also fell 6.1 percent in the first half of this year compared to the previous year, and the Trade Ministry cited a slowing economy in China and other emerging markets as a main factor.