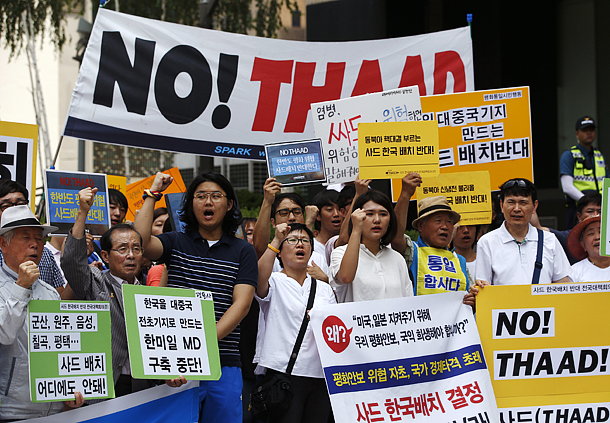 South Koreans shout slogans during a rally near the U.S. Embassy in central Seoul on Monday to denounce deploying a Thaad battery in Korea. [AP/NEWSIS]

Following Seoul and Washington’s decision to deploy the Terminal High Altitude Area Defense (Thaad) system to Korea - despite strong opposition by China - there are worries that Beijing may try to thaw its chilly relations with Pyongyang.

Chinese Foreign Minister Wang Yi strongly criticized the decision to deploy the U.S.-led anti-missile defense system to South Korea on Saturday in Colombo, Sri Lanka, telling reporters that the planned deployment “far exceeds the Korean Peninsula’s defense needs.” On Friday, South Korea and the United States announced its decision to deploy the Thaad system here, an indication of the two countries close alliance and a counter to Pyongyang’s nuclear and missile threats. The move was protested by the Chinese and Russian foreign ministries within hours.

Wang emphasized that Beijing does not care to hear any explanations, and went on to accuse the United States of “using another country’s insecurity as a foothold to enable its own security.”

The Chinese envoy then called on Washington to stop using the pretext of security to threaten another country’s just security interests and also urged “our South Korean friends to make a level-headed decision.” 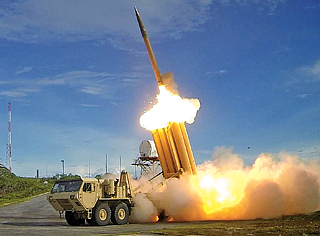 On Monday, in its first official statement on the issue, the North Korean military threatened a “physical response” as soon as the location and timing of the placement of the Thaad system in South Korea is confirmed, through its state-run Korean Central News Agency.

It accused Washington of trying to build its military hegemony and “keep in check other super powers” through forming an Asian NATO (North Atlantic Treaty Organization).

“The super powers in Northeast Asia that North Korea mentioned are China and Russia,” Park Byung-kwang, director of the Center for Northeast Asia at the Institute for National Security Strategy, told the JoongAng Ilbo on Monday.

“Through such remarks, North Korea wants to widen the schism between the United States and China, and show that Beijing, Russia and Pyongyang are in the same boat. It wants a strategic structure of South Korea, U.S. and Japan on one side versus North Korea, China and Russia on the other.” Veteran diplomat Ri Su-yong, a vice chairman of North Korea’s ruling Workers’ Party, made a visit to Beijing at the end of May leading a large delegation of officials, providing impetus to improve bilateral relations. The Thaad decision is expected to bring even more momentum.

Monday marked the 55th anniversary of the signing of a military treaty between Pyongyang and Beijing, another opportunity for the two countries improve relations strained in recent years by the North’s nuclear and missile tests.

North Korea analysts predict that continued exchanges between Pyongyang and Beijing will reduce the strains - possibly at the cost of the strongest-ever relations between South Korea and China.

Chinese President Xi Jinping has yet to hold a summit with North Korean leader Kim Jong-un but has met with President Park multiple times.

Thus, Seoul held off official negotiations on the Thaad issue despite Washington official’s clear signal that it wants to deploy the battery.

Bringing Thaad to the Korean Peninsula has been regularly protested by both China and Russia over security concerns and claims it could trigger an arms race and lead to regional instability. The Thaad system comes with a powerful radar that can cover more than 1,000 kilometers (621 miles). China and Russia have expressed concerns that the radar could be used as a possible method of American surveillance against them.

President Park Geun-hye on Monday firmly backed the Thaad plan in her first remarks on the issue since the decision was announced in a meeting with her senior aides at the Blue House.

“It is purely a defense measure we have taken to protect the people of our country,” she said.

“As we have repeated numerous times, the Thaad will not target any third country or encroach upon its security interests,” she said.

“The biggest victim in the case of North Korea’s provocations is our country and our people, and neglecting such a threat is like neglecting a situation where North Korea’s nuclear or missile weapons may be dropped on our territory and incur many casualties,” she continued.

Lawmakers and residents of regions that have been named as candidates to be home to the Thaad battery have voiced opposition to the system in Korea. Others have called for caution to maintain stable diplomatic relations.

“The deployment of the Thaad is something where you lose more than you gain,” said Rep. Ahn Cheol-soo, former chairman of the minor opposition People’s Party, to reporters at the National Assembly Monday. “While missile defense might be bolstered, denuclearization or unification will become more difficult.”

He added, “The Thaad issue is not just a security issue. Rather, it is an issue in which the effect on the economy or diplomacy is much bigger.”

In a statement Sunday, Ahn called for a national vote to review the deployment of the Thaad, calling it “not helpful” to the people.

But Kim Chong-in, interim leader of the major opposition Minjoo Party, said he did not think Thaad was an issue that should be up for national vote. He also said at a National Assembly meeting, “For the sake of South Korea-U.S. relations, there needs to be a consensus among the people on the deployment of the Thaad, and a process for the government and National Assembly to cooperate more closely than before is necessary.

“Right now, China and Russia have expressed staunch opposition,” said Kim, “and we need to keep in mind that if this worsens, it can lead immediately to Beijing’s implementation of economic restrictions on us.”

But Korean Finance Minister Yoo Il-ho downplayed the possibility of an economic backlash at the National Assembly Monday, saying he does not “expect a large-scale retaliation” from Beijing, adding China is expected “to separate politics from economy.”

China has been especially sensitive to the AN/TPY-2, a high-resolution, rapidly deployable X-Band radar designed to detect, track and identify ballistic missile threats at long distances and at very high altitudes.

Washington claims that the radar will be deployed in terminal mode to limit its range, but Beijing remains mistrustful because the hardware also has forward-based mode capabilities with a longer range, which it believes can be used by the U.S. military to track Chinese missiles.

Seoul is caught in another key divide between Washington and Beijing over the South China Sea, claimed by China, the Philippines, Brunei, Indonesia, Malaysia, Taiwan and Vietnam.

A landmark ruling set to be released Tuesday on the sensitive issue by the Permanent Court of Arbitration (PCA) in the Hague may also play a role in a schism in Seoul and Beijing’s relations.

The Philippines filed the complaint with the court in 2013 after China took control of a disputed reef off its coast. China has been reclaiming reefs and building artificial islands in the area and has boycotted the case.

The issue has produced a schism between countries aligning themselves with China - who has Russia as its biggest supporter - or the United States - generally backed by its allies.

South Korea has been striving for balance, though there has been mounting pressure to join Washington, who has insisted on freedom of navigation in the South China Sea, strategically important waters for Beijing’s naval power ambitions.

During a summit with President Park last October, U.S. President Barack Obama said he expects Seoul to speak out when China fails to “abide by international norms and rules.”