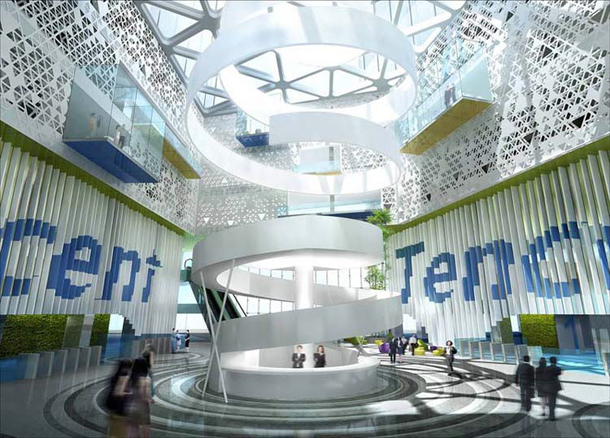 The lobby of the headquarters of Tencent, one of China’s largest and most used Internet service portals. The company is based in Shenzhen. [JOONGANG PHOTO]

Recently, I met with businessmen from Shenzhen, China and once again felt their confidence, built from their passion for their businesses and China’s economic growth.

Under the banner of “mass entrepreneurship and innovation,” China is creating an unprecedented start-up boom, and Shenzhen is considered start-up paradise. It has evolved from a manufacturing base for affordable knockoffs into an innovative start-up hub and mecca of new industries like the Internet of Things and drones.

China applies for the most international patents, having surpassed the United States five years ago, and half of China’s patent applications come from Shenzhen.

Foxconn, the biggest electronics manufacturer in the world; BYD, which sells the most electric cars; Tencent, which acquired Finland’s world-class mobile game maker Supercell; and Huawei, a global communications device maker that filed a patent infringement suit against Samsung Electronics, were all founded in Shenzhen and have headquarters there. Under the slogan “Make with Shenzhen,” the city encourages manufacturing start-ups, and young talents gather in various start-up communities, working day and night for success.

What contributed to this growth in Shenzhen is the competitive system of production developed in a short time using the existing manufacturing cluster. It also has the geographical advantage of being close to Hong Kong, a global logistics hub. The Shanzhai culture of knockoff name-brand products evolved into product innovation for start-ups as companies shared resources. Central and local governments’ full support encouraged active private investment and a start-up boom, allowing an optimal environment for startups.

Shenzhen’s rise reminds one of Korea’s short-lived venture boom. Around 2000, more than 10,000 venture companies were established in an unprecedented boom, and Korea became an Internet power after the United States. 20 years ago, Korea enacted a special act on venture businesses and launched the Kosdaq market to support growth of innovative venture companies. It also set up a market to raise funds. However, as the IT bubble burst worldwide in the early 2000s, Korean venture industries went through a slump.

Lately, the venture start-up ecosystem is reviving, thanks to the venture vitalization policy in the government’s creative economy platform. However, it is hard to say that Korean venture companies are viable against fierce global competition.

Many of the key figures in China’s venture industries studied abroad and worked at companies like Google and Apple before returning to China. Their workforce is already the best in the world. Korea’s talents need entrepreneurial education and incentives to start venture companies that can change the world.

China’s new generation already widely uses mobile payments. The Chinese government’s policy of emphasizing post-management over prior regulation allowed the market to grow first before imposing appropriate regulations for the market, and the fintech industry grew drastically as a result. Korea has been working hard to vitalize fintech for years, but various regulations discourage IT companies’ entry into the field.

Last week, the government announced a plan to enhance innovative capacity for small and medium-size firms and start-ups, which includes deregulation to boost private venture investments. However, the measures, which include new tax benefits, only supplement the existing measures. Since the existing venture policies failed to vitalize the industry, we need more fundamental reform to change the outdated paradigm. Not just the companies but also the policymakers and system architects need creativity and destructive innovation.


*The author is the chairman of the Korea Venture Business Association and CEO of SOLiD.