Table for 1: More are dining alone

Table for 1: More are dining alone 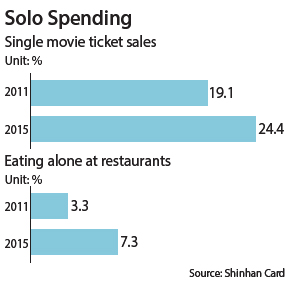 A 27-year-old man surnamed Choi, who recently graduated from college and got a job in Seoul, has been living alone for eight years. It is not unusual for him to stop by a convenience store or small restaurant near his home to grab a quick meal.

“I usually bought a cup of noodles or gimbap [rice rolls] while I was in school and now I still do so during the weekend,” Choi said. “And oftentimes I enjoy going to movie theaters by myself even though I am dating someone.”

Recent data show there are more Koreans like Choi who spend more time and money on solo activities.

According to a study released by Shinhan Card on Tuesday, more people are buying food for one person at convenience stores, purchasing single movie tickets and drinking alcohol alone.

Shinhan Card said the portion of its customers purchasing single movie tickets compared to all movie ticket purchases rose from 19.1 percent in 2011 to 24.4 percent last year. The number of people buying for one at restaurants rose 3.3 percent to 7.3 percent during the same period.

Shinhan Card reviewed its customers’ spending habits and the number of transactions less than 10,000 won ($8.71) at restaurants and movie theaters. The company, however, admitted that not all these transactions meant consumers were spending time alone.

“A number of single households continue to grow and more people are doing mobile shopping,” said Namgoong Sul, an executive at the Shinhan Trend Institute. “The paradigm of private consumption is changing rapidly.”

In fact, the number of single households in Korea topped 5 million for the first time last year. According to Statistics Korea, the number hit 5.11 million in October 2015, up 171,000, or 1.3 percent, compared to the previous year.

According to Shinhan, transactions made by its customers abroad rose 200 percent from 2010 to 2015. The figure for foreign online markets increased 600 percent during the same period.

Shinhan added that Koreans are seeking places where they can relax, as the economy remains sluggish.

“Low-alcohol drinks such as sparkling wine are growing more popular among female Koreans and it is expected that there will be more multi-themed cafes where young professionals can enjoy beer while reading books,” said Shinhan.

Some Starbucks, McDonald’s and Paul Bassett stores in Korea are beginning to sell drinks with low alcohol content to their customers.