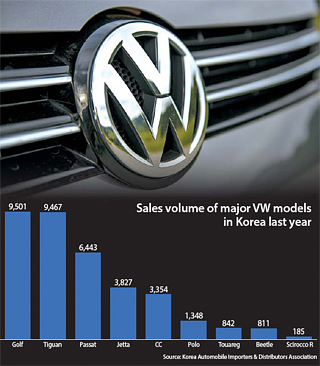 I fell in love with cars when I was young. More specifically, it was a Volkswagen that stole my heart - a Beetle, cute yet very solid.

It was my dream car, the one I wanted to buy growing up. My love of cars led me to become a motor vehicle driver while completing my compulsory military service. I realized then that a car was a man’s toy, one that requires care, and I consistently washed and maintained my car.

After graduating from college in 2008, I worked as a salesman at a beer company and a cell phone retailer. I considered these jobs a stepping stone to becoming an automobile dealer.

In spring 2013, I eventually landed a job as a dealer at a Volkswagen branch in Incheon. The first year I joined, the German automaker had leapfrogged to becoming the best-selling import car brand in Korea, outpacing Mercedes-Benz and BMW.

My friends admired me for working at an “esteemed German import car brand” and always asked for a ride. I was proud of the Volkswagen badge on my suit.

Selling popular models like the Tiguan and Golf was easier than selling beer and cellphones. Many visitors to the showroom had already made up their minds to purchase a car before I even pulled back the curtain. They were not just swinging by to take a look. I didn’t even need to offer a lengthy explanation other than, “We are an honest German car brand. It runs, slows down and stops well.”

Promotions and discounts were secondary matters. Customers were already signing contracts without them. I sold up to 20 cars a month, and I was happy to earn money while recommending cars I love.

When my customers thanked me for proposing such a quality car, I was proud to be an auto dealer. I even set a goal to become the best Volkswagen salesman in Korea.

My two-year stint came to a halt last September, when Volkswagen was found to have rigged emissions data in the United States. At the time, I didn’t think it was such a big deal. I assumed it wouldn’t affect Korea.

But customers turned away quicker than I expected. For the first time in two years, I saw a customer refuse to accept my calls just before signing a contract. It took a lot of time for me to answer questions that were suddenly coming from prospective buyers.

“What if the car turns out to be defective later?” “What if the used car price of the model drops later?” I started getting inquires over the phone asking if dealers were deceiving customers into buying the cars.

“You just go on selling as usual because the cars have no problem,” they said. “It will pass.”

It was as far as I could get as an answer. I felt like telling them, “I don’t have any idea, either,” but I had no choice but to keep my mouth shut.

One day, Volkswagen Korea headquarters sent me promotion plans, including discounts and monthly installment-based sales plans with zero interest. I changed the tagline I used to pitch the cars to my customers. “It’s a German car that has a nice price for the quality.”

I felt like I had become a liar after repeating over and over that the cars had no problem. I could feel the stress building at work. I drank more.

One day, after a salesman at another import car dealer sarcastically said, “My brand didn’t go so far as lie to sell automobiles,” I shook him by the collar.

On my commute home, I cried.

The Beetle is no longer my dream car. I tendered my resignation in March. Ever since, I have been working as a used car salesman. The place I work at is not as posh as before.

But I feel a heavy weight has been lifted. My trauma is still sometimes triggered by the occasional used Volkswagen that comes into our showroom. Otherwise, I no longer feel stressed about news coming out of VW.

I am still selling cars. But I only want to sell good cars.