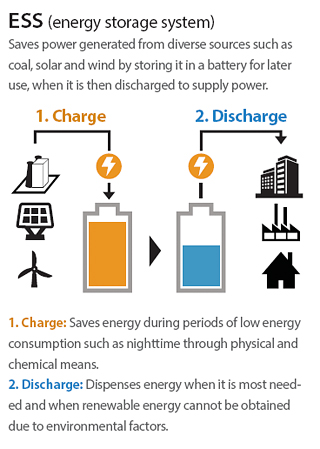 ESS is a facility that stores energy during periods of low energy consumption for flexible use later. It provides the basic infrastructure necessary for environmentally-friendly power generation, as energy output from renewable sources like solar and wind are often irregular.

The acquisition of ESS control software allows Doosan to manage the entire process of ESS operation from design and installation to test operation.

The newly acquired company will operate under the new name Doosan GridTech and play a major role in ramping up Doosan’s ESS business. The cost of acquisition cannot be disclosed due to contract terms, the company said.

“The acquisition grants us an advantageous position in tackling the global ESS market, which is expected to become a 12 trillion won ($10 billion) market by 2025,” said Chung Ji-taik, vice chairman and chief operating officer of Doosan Heavy Industries & Construction.

“Our focus will mainly be on the domestic and North American markets, which are showing rapid growth in the ESS market. But in the longer term, we will expand our presence to Southeast Asia and European regions as well.”

The global ESS market is growing at a speed of 20 percent annually, according to Doosan, and the domestic market is chasing the global trend.

Part of the plan includes allocating 4.5 trillion won for the ESS business.

Doosan is a relative newcomer in the ESS market, making its entry last September after winning a project with the Korea Smart Grid Institute.