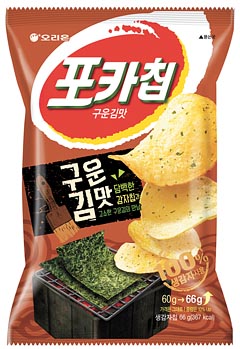 After the enormous success of its banana-flavored Choco Pie, leading confectionery company Orion is introducing a roasted seaweed-flavored potato chip as a second product to celebrate its 60th anniversary.

Orion said Tuesday that it decided to roll out the roasted seaweed, or gim, Pocachip after seaweed flavoring became increasingly global. The company briefly sold a seaweed-flavored potato chip as a trial in 2003, and some customers complained about it being discontinued.

“Our marketers and researchers have been conducting market research on seaweed snacks in Korea as well as Japan, the United States and Australia over the past two years and reached a decision to develop the product after learning the product’s potential,” said an Orion spokeswoman.

A big concern in development was the optimal size of seaweed particles, she added.

Of course, Korea eats a lot of seaweed. Gim, often translated as dried laver, is served in side dishes and used in gimbap, or rice rolls.

For Koreans, Pocachip plays a similar role to Lay’s in America. First launched in 1998, it has been the No. 1 potato chip in Korea for the past 14 years. Last year, annual sales surpassed 150 billion won ($130 million) - a record for any domestically produced snack.

Banana Choco Pie, a banana-flavored marshmallow sandwich dipped in chocolate, sold over 70 million units around the world since its release in March. After the snack was sold out for several weeks, Orion ramped up production and entered 24-hour operation in April.

The original Choco Pie gained global publicity after South Korean companies at the now-shuttered Kaesong Industrial Complex used it as a form of bonus for North Korean workers.