‘Many experiences can be resources,’ says former CDC director

‘Many experiences can be resources,’ says former CDC director 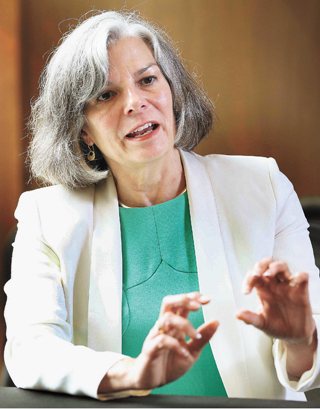 Julie Gerberdin, Former director of the Centers for Disease Control and Prevention

With the spread of the Middle East Respiratory Syndrome (MERS) last year, people in the country learned the dreadful impact that an epidemic can bring to society. One year later, fear over the Zika virus has gripped the country as multiple patients have been confirmed to be infected by the Zika virus. Julie Gerberding, 61, former director of the Centers for Disease Control and Prevention (CDC), recently visited Korea. Gerberding is credited with successfully leading the agency through emergency responses to public health crises including those involving SARS and anthrax.

The JoongAng Ilbo sat down with Gerberding to discuss the management of epidemics and her experience as the head of the CDC. She was invited to deliver a keynote speech for the Global Bio Conference 2016, organized by the Ministry of Food and Drug Safety.

Q. The SARS epidemic struck many people with terror when you were working as CDC director between 2002 and 2009. How did you overcome the crisis and what did you learn from that experience?

A. What we learned from the experience can be summarized into three things. First, we need preparedness at a global level to more effectively manage and cope with the situation if we run into a similar crisis in the future. We always need to plan against the worst-case scenario.
Second, we should be able to make the best decision possible with information available right now because the information we need is not always accessible. The government also has to share with the public honestly what it knows and what it does not know so it can gain the public’s trust. The government should always inform people of the status quo with honesty and integrity and deliver the best recommendation based on the current situation.

Third, even if the government does all this, it cannot get the public’s trust unless it focuses on PR and communication at the same time. It is important to operate during a crisis with the most transparent communication possible.

You particularly emphasize public communication and PR during a crisis. How important do you think they are?

When we have a public health crisis or other various national disasters, the key to get through them is that the government shows a high level of confidence so that it can build common ground with the public.

In order to raise the level of confidence in the government, it is important for the government to come forward to disclose information with honesty instead of only telling the parties directly involved.

In addition, the key to PR and communication is to let people know that the government is making the best decision possible with the appropriate experts based on professional information. Only in this way we can receive trust from the public. It’s never easy but it is necessary.

What do you think is the No.1 priority during a public health crisis?

It is crucial for the government to understand the suffering of the public and to share any social consequences. It is essential to show that the government is making its best effort to address various issues that plague the public.

Korea experienced a serious public health crisis due to MERS last year. Can we equally apply the lesson learned from SARS to the MERS situation?

These principles can be applied to MERS and other unexpected public health crisis like the Zika virus infection. Making a decision in a new situation is always far more challenging. I think Korean people became more terrified of MERS because there was little scientific information about this disease when it hit Korea.

Infectious diseases like MERS and SARS will only increase in the future. They will come back undoubtedly because there will be more contact between people and animals due to urbanization and people’s moving around the world by airplane.

The world is already connected with about 93,000 commercial flights every day. As a result, public health concerns or infectious diseases in one specific region can affect other parts of the world in real time.

Cancer has long been a big health problem. What’s the latest status of human effort to fight cancer?

We see ground-breaking progress in oncology. The most pronounced milestone is the development of immunotherapy, which extends the survival of cancer patients and is shifting the paradigm of cancer treatment.

Not long ago, former U.S. president Jimmy Carter developed melanoma, which metastasized to his brain. But shortly after immunotherapy treatment, he was announced cancer free. He was treated with MSD’s immunotherapy drug Keytruda.

However, we need more studies because immunotherapy is in the early stages. If the immune system is more deeply studied, immunotherapy drugs will be used not only for cancer treatment but also for prevention.

You were the first female CDC director and people said you broke another glass ceiling for professional women.

The CDC has many excellent and enthusiastic people. It was an honor for me to have worked and played a role as a leader of this organization. Today, there are more social opportunities given to women compared to the past.

Of course, there are more chances for women to become leaders. I hope my experience will be helpful to other women and I’ve made a small contribution to enabling more women to be active in society. I also hope, based on these efforts, women’s promotion to major job positions will no longer be surprising or even news.

What is your advice to young women?

I would tell them to follow their passion. It is important to set a concrete goal to pursue based on what you want. Second, get education opportunities. Third, build up your experience. Many experiences can be resources when you seek a new opportunity or try a new career.