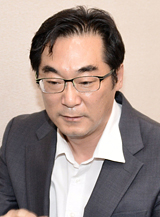 A senior official of the Ministry of Education was sacked Tuesday for comparing Korean people to “dogs and pigs.”

The Education Ministry said it will ask the Ministry of Personnel Management to approve its decision to fire Na Hyang-wook, director general for the ministry’s policy planning.

“He hurt the people with his inappropriate remarks and disgraced the entire public servants’ community,” Vice Minister of Education Lee Young said.

The scandal began last week after the Kyunghyang Shinmun reported on Friday that Na made the remarks during an evening gathering with the newspaper’s reporters on Thursday. At the dinner, Na was accompanied by other ministry officials including the spokesman.

According to the newspaper, Na believes the country needs to formally establish a caste system. He also said that 99 percent of people should be treated as dogs and pigs, but that he belongs to the other 1 percent.

“Not everyone can be equal,” he was quoted as saying. “We must accept reality.”

He also said it is hypocrisy for the people to say they feel saddened by a young subway mechanic’s recent death. The 19-year-old worker was crushed by an incoming subway train while working on a Guui Station platform door in May. The accident drew renewed attention to the low wages, lack of safety measures and generally poor working conditions faced by young contract workers and revealed years of corruption at Seoul Metro.

Although the remarks were made at a private dinner, the newspaper said it decided to make them public since Na is a senior official in charge of the country’s education policy. It also said the reporters pointed out the seriousness of his comments and offered him a chance to recant them during the dinner, but Na persisted.

Na, 47, was an elite member of the government. He passed the public servants exam in 1992 and served as a secretary to the education minister during the Lee Myung-bak administration. He also worked at the Lee Blue House and key offices in the Education Ministry.

On Friday, Na and the ministry spokesman visited the newspaper and apologized for his comments. He said he made the remarks because he was drunk and tired.

But public rage had already snowballed over Na’s remarks.

The ministry issued a public apology on Saturday and suspended Na, but the ruling and opposition parties demanded that the ministry sternly punish him.

Na was summoned to testify before the Education, Culture, Sports and Tourism Committee of the National Assembly on Monday and made another apology. He said he could not remember clearly what he said during the dinner because he was too drunk and tired. As the public rage showed no sign of subsiding, the ministry said Tuesday that it would fire him.

Rep. Woo Sang-ho, floor leader of the main opposition Minjoo Party of Korea, demanded Tuesday a complete overhaul of the cabinet, as multiple senior officials of the Park Geun-hye administration were marred in a series of recent scandals.