‘We must stand united against the Kim regime’

‘We must stand united against the Kim regime’ 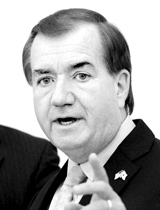 Rep. Ed Royce, chairman of the U.S. House Committee on Foreign Affairs, describes Washington’s latest sanctions on Pyongyang as being rooted in a “strategy that we know works.”

The U.S. Department of the Treasury last Wednesday added 11 new officials, including Kim, and five entities to its blacklist to hold them accountable for Pyongyang’s violations of human rights.

Royce, a Republican who represents California’s 39th Congressional District, said after the Banco Delta Asia sanctions in 2005, North Koreans incessantly asked U.S. officials, “When do we get our money back?” But he added these measures were lifted too “prematurely.”

The latest sanctions were mandated by the North Korea Sanctions and Policy Enhancement Act of 2016, which Royce himself wrote. Congress passed the bill in February and it was enacted after U.S. President Barack Obama signed it later that month.

Q. This is the first time the U.S. government has put North Korean leader Kim Jong-un on its sanctions list for human rights abuses. What do you think of this decision?

A. It was long overdue. Torture, rape and executions have been routine in Kim Jong-un’s prison camps for years. Now at least 120,000 North Korean political prisoners are suffering in these barbaric conditions. The world cannot accept Kim Jong-un’s gross human rights abuses or his threats of nuclear holocaust. These sanctions are an important step to help force change ? and they must be aggressively enforced. The people in North Korea have suffered for far too long.

What kind of impact will be made through these new sanctions?

These sanctions are rooted in a strategy that we know works. A decade ago, the United States targeted Macao-based Banco Delta Asia for its role in laundering money for North Korea, and cut it off from the U.S. financial system. This led other banks in the region to shun North Korean business, isolating the rogue regime.

Soon, according to one former top U.S. official, “every conversation [with the North Koreans] began and ended with the same question: ‘When do we get our money back?’” Unfortunately, this pressure was lifted prematurely after the previous leader, Kim Jong-il, offered concessions on his nuclear program ? concessions that ultimately were never made. It was a big mistake.

Do you think there will be a backlash from North Korea? How can the U.S. government show it will not tolerate North Korea’s human rights abuses anymore?

Ultimately, I hope North Korea will see the resolve of the United States, South Korea and our global partners and stop its repressive acts. I was just in Seoul last month and I can tell you that I’ve never seen the U.S.-South Korea relationship as strong as it is today. I think this relationship will only get stronger. Republicans and Democrats in Congress are very committed to the alliance.

You played a leading role in making and passing the House Resolution 757. Without this, would these newest sanctions have been possible?

The U.S. administration’s “strategic patience” with North Korea failed. I’ve long believed that the answer to North Korean threats and human rights abuses is not patience, but more pressure. That’s why I’m glad that my bill, now a law, has resulted in stiff new sanctions. We must continue to stand united against the Kim regime.

What is needed to improve North Korean human right situation?

It’s important that we break the information monopoly the North Korean regime tries to maintain. That’s why I authored legislation - signed into law by President Obama in 2010 - to permanently authorize Radio Free Asia and ensure it continues to broadcast its message of freedom, democracy and respect for the rule of law directly.