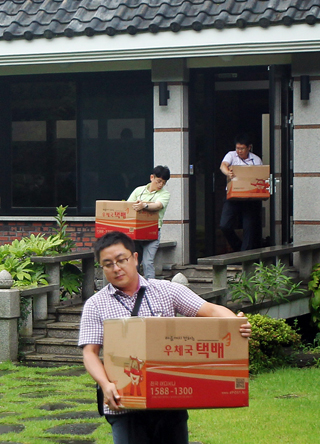 Prosecutors carry out boxes of documents and hard drives they seized from the headquarters of NXC Corporation on Jeju Island on Tuesday. [NEWSIS]

The probe of Jin Kyung-joon, the former senior prosecutor accused of insider trading, has spread to his friend Kim Jung-ju, co-founder of the online gaming company Nexon.

On Tuesday, prosecutors raided the residences of Jin, Kim and the offices of Nexon and NXC Corporation, the parent company of Nexon. Kim is currently the CEO of NXC.

Prosecutors seized hard disks and financial and legal documents of Nexon and NXC.

“Kim showed signs of trying to protect his friend Jin,” said a prosecution official. “But if the probe turns to Nexon, then Kim may begin to cooperate with prosecutors in order to save his company.”

Prosecutors intend to summon Kim for questioning after digesting as much information as possible on Nexon and NXC. They are looking for evidence of possible corruption in their management.

When prosecutors discovered that the value of stock and real estate owned by NX Properties amount to some 60 billion won, they began to suspect that Kim tried to acquire the assets of NX Properties at a giveaway price.

Jin was a chief prosecutor of the Korea Immigration Service under the Ministry of Justice. The probe started after the Government Public Ethics Committee discovered in March that he had sold his shares of Nexon for 12.6 billion won last year. He bought them for some 400 million won in 2005.

Jin claimed he did not violate any laws, yet when the government launched its probe in April, he immediately submitted his resignation. As an ordinary citizen, the Government Public Ethics Committee cannot sanction Jin if he doesn’t comply with requests for information.

Jin and Kim are both alumni of Seoul National University.