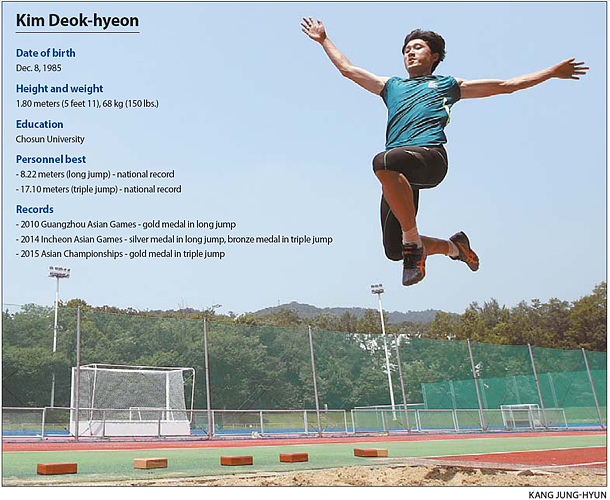 World-class athletes in long jump, a track-and-field event in which an athlete jumps as far as possible, often leave spectators in awe as they leap in the air like birds. However, jumpers train and manage themselves strictly year-round to add that one centimeter to their distance.

Korean long jumper Kim Deok-hyeon, who has dedicated 17 years to the sport, plans to stake everything he has in the coming Olympics. He will be participating in two events this summer: long jump and triple jump, together known as the “horizontal jumps.”

A Korean jumper qualifying for the Olympics in the horizontal jumps was unprecedented, until Kim this year became the first Korean to pass Olympics standards in both events set by the International Association of Athletics Federation (IAAF).

“Anyone who qualifies for the Olympics, I am sure their goal is to nab a medal,” said Kim. “I have been training for this for a long time now. These days I am concentrating on imagery training in my head.”

No Korean in the history of the Olympics have claimed a medal in track and field. Runners such as Hwang Young-cho have won medals for Korea in marathon but the field has been nothing but a wasteland for Korea.

The prospect that a Korean will finally stand atop of the podium this summer in track and field has never been higher.

During the long jump finals at the 2016 Messe Ried LA-Meeting in Ried im Innkreis, Austria, last month Kim jumped 8.22 meters (26 feet 11 inches), breaking the Korean record of 8.2 meters, also set by Kim in 2009. Not only did he set another Korean record, but he jumped farther than the Olympics qualifying standard which was 8.15 meters. Kim has already qualified for the Olympics in triple jump when he jumped 17 meters July last year, well above the Olympics qualification standard of 16.85 meters.

Kim’s 8.22-meter jump surpasses the 8.16-meter record that earned Mitchell Watt of Australia a silver at the 2012 London Olympics. “I never thought I would be able to break the record I set in 2009,” Kim said. “That was definitely one of the highlights of my life when I jumped 8.22 meters. I hope no one breaks this record for the next 30 to 40 years.”

At 31 years old, Kim may seem past his prime to accomplish such a feat. But what enabled Kim to set a new Korean record was his enthusiasm and willingness to learn new techniques. While training with American jumpers in March in California, Kim realized that he needed to change his approach to improve his performance. Instead of sprinting 50 meters away from the jumping board, he would stand still by the 40-meter mark before start running. Through this new approach, he was able to add more consistency. “I could not see any improvement by sticking to the form that I have used for over 10 years,” Kim recalled. “I saw that many American athletes jumping far with a standing start. It allowed me to conserve my maximum speed until I take off.”

His rather ascetic way of life also helped Kim improve his jump. After becoming a track and field athlete in elementary school, he began training hard, running up 245 stairs in 40 seconds by the time he was in high school. Since being admitted to the national team, he’s refrained from drinking sodas or coffee. He’s also abstained from eating any flour-based food.

Since getting married last November, Kim also has another motivation that allows him to leap further.

Kim was disqualified from preliminary stages in triple jump during the 2008 Beijing Olympics and 2012 London Olympics. Rio Olympics will be his first Olympics to compete in the long jump. “I am betting everything I have on the long jump this summer,” Kim said, sounding determined. “If I can overcome myself, I am sure I can win an Olympic medal.”