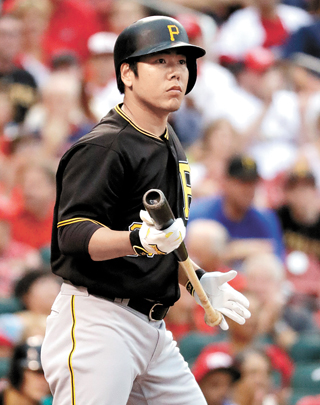 Pittsburgh Pirates Kang Jung-ho is under investigation by the Chicago police for a sexual assault allegation. [AP/NEWSIS]

The Major League Baseball Commissioner’s Office said it will not impose any punitive measure on Pittsburgh Pirates’ Kang Jung-ho until after a sexual assault investigation on him by the Chicago police is concluded.

“We are aware of the situation and are working with law enforcement,” MLB Commissioner Rob Manfred said Wednesday before the All-Star Game in San Diego, according to the Pittsburgh Post-Gazette. “We will make a decision when we have sufficient facts as to whether application of, for example, the administrative leave provisions in the new policy are applicable.

Chicago police confirmed last week that they were investigating a sexual assault allegation against Kang. While at an away game against the Chicago Cubs last month, Kang allegedly invited a 23-year-old woman to his hotel in downtown Chicago. There, Kang and the woman had alcoholic drinks, after which the woman claimed to have lost her consciousness. She drifted in and out of consciousness as Kang sexually assaulted her, the woman said. She regained full consciousness later when she was in a taxi, according to her claim.

No criminal charges have been filed against Kang but he remains to be a “potential suspect” in the case.

Last August, the MLB and the Major League Baseball Player Association signed an agreement and established a new policy to deal with sexual assault and domestic violence. This policy grants the MLB Commissioner’s Office the authority to investigate any allegations regarding these matters. The office can also impose disciplinary measures it deems necessary, regardless of the judicial action by the court, without any limit to the level of punishment. As soon as Kang’s news went viral, the MLB issued a statement saying that it will “be respectful to the police investigation.”

For the Pirates, its official stance is to protect Kang until the investigation on him is concluded. Even after the news about Kang broke out on July 6, the Pirates continued to place him in the starting lineup. Kang has since played in five games.