UFC fighter Choi hopes to make all the right punches

UFC fighter Choi hopes to make all the right punches 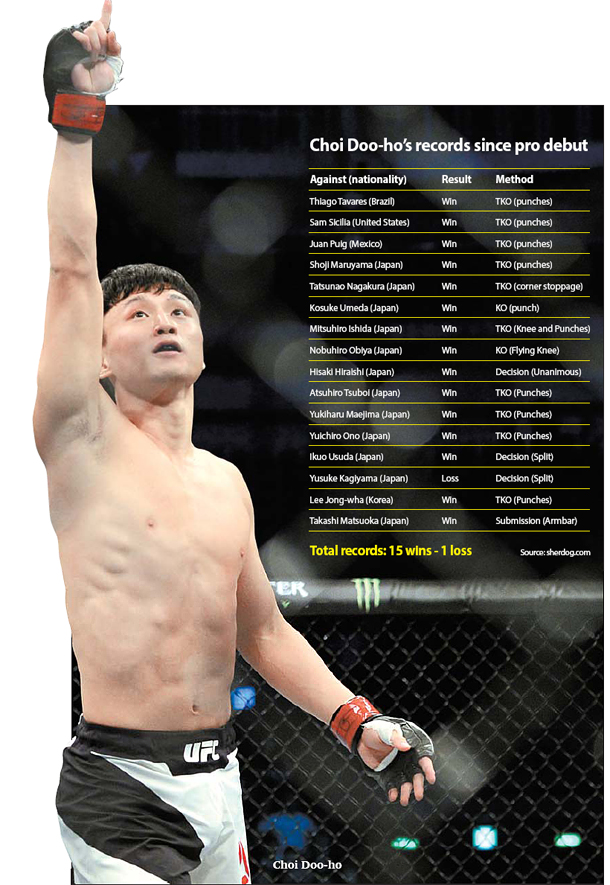 Featherweight fighter Choi Doo-ho is living up to his nickname “Korean Superboy.”

The formidable Choi has yet to concede a single bout in the Ultimate Fighting Championship (UFC) since he joined the promotion two years ago.

Now, after three UFC victories, including one last week against Thiago Tavares of Brazil, Choi has his eye on becoming the first Asian champion in the UFC.

During last week’s International Fight Week, Choi faced veteran fighter Tavares on Saturday at the Ultimate Fighter 23 Finale in Las Vegas. In the event, the “Korean Superboy” proved himself once again as the UFC’s hottest rising star, overcoming the Brazilian with a technical knockout.

Taken down to the mat by Tavares in the beginning of the first round, Choi brought himself back up and began throwing punches at his opponent. Just two minutes into the round, Choi nailed a right-hand cross on Tavares’ face and drove a finishing punch immediately after to conclude the fight.

By the end of the event, this fight was chosen as the performance of the night.

The win over Tavares was Choi’s third straight victory inside the UFC Octagon, making him undefeated so far in the American mixed martial arts (MMA) promotion.

“My first goal is to become a champion,” said Choi during a press conference in Yeouido, western Seoul, on Tuesday. “Other than that, I also want to be able to thrill the fans.”

Choi entered the spotlight with his bold style of play and signature punches. Add to that Choi’s facial expressions as he enters the Octagon - lacking in anxiety and filled with confidence - and it’s easy to see why fans are drawn to him.

“Many fighters around the world train hard, shedding blood and tears, to get to the UFC,” Choi said when asked about his facial expressions. “For me, just the simple fact that I get to fight in such a dream stage makes me happy.”

He is quick on the stage, too, taking down opponents with surprising speed.

Choi has three wins under his belt but has only spent less than five minutes inside the arena. His first win, a technical knockout with punches against Juan Manuel Puig of Mexico in November 2014, came only 18 seconds after the brawl started.

Choi says is determined to take on any fighters in the world to become champion, even if it means taking on the current title holder in UFC featherweight, Conor McGregor of Ireland.

“I think I am closer to becoming a champion than any other Asian fighters,” Choi said. “My confidence also stems from my training and tactical support from my coach. I know I can become the first Asian UFC champion, and I am determined to make it happen.”

At the moment, Choi has won 15 bouts total in his career and lost only one since he debuted as a professional fighter. Of the 15, he claimed nine with knockout punch.

“I think I have good sense of timing when it comes to punches,” Choi said. “I do have some special training technique I do, but I cannot reveal the secret.”

Choi still credits older fighters for paving the way to the UFC, including Jung Chan-sung, also known as the “Korean Zombie,” and Kim Dong-hyun, dubbed the “Stun Gun.”

Choi is often referred to as the “second Jung Chan-sung,” and while this is flattering for the 25-year-old fighter, he says he cannot be the second of somebody for long.

“I will overcome my seniors one day,” Choi said.

Choi’s coach, Yang Sung-hoon, doesn’t think it will take long for Choi to accomplish the feat.

“Genius is the only way to describe Choi,” Yang said. “He can see those points and the timing to strike, something other fighters often miss or cannot see.

“What also distinguishes Choi from other fighters is that he actually enjoys the training and everything else about this sport,” Yang added. “He does not overdo it or abuse himself.”

For now, Choi is taking some time off from the promotion to train in Korea before his next fight.