Gloomy outlooks in second half

Gloomy outlooks in second half 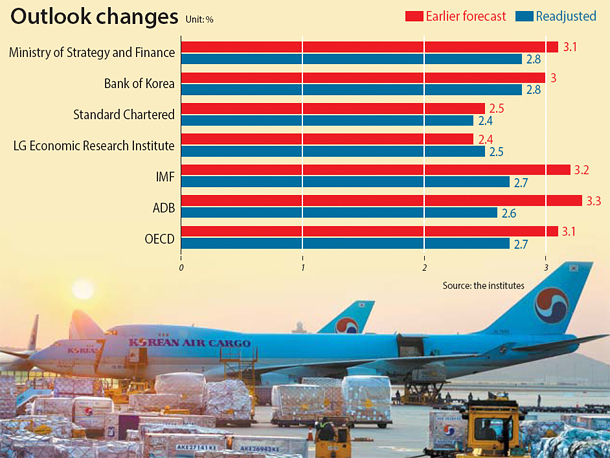 Amid concerns over a possible retaliation from China on Korean exported goods to protest the Terminal High Altitude Area Defense (Thaad) system, foreign financial companies speculated that the economic hardship that Korea faces will only worsen in the year’s second half.

Financial institutions released reports a day before the Bank of Korea is set to announce its latest update on the nation’s economic growth today.

In its report Wednesday, Standard Chartered Group projected that Korea’s economy will likely grow 2.4 percent this year, citing widening uncertainty of the global market including the recent Brexit vote as well as persistently weak exports and domestic investment.

“We recently revised down our growth forecast from 2.5 percent to reflect the likely impact of the U.K. Brexit vote,” said Park Chong-hoon, head of Korea economic research at Standard Chartered Bank Korea. “We see rising downward risks in the second quarter from higher global market uncertainty and persistent weakness in both exports and domestic investment. We expect these downward risks to rise as we move into 2017.”

Park lowered next year’s growth outlook as well from 2.8 percent to 2.5 percent.

Standard Chartered’s readjusted outlook is far lower than the 2.8 percent projection that the Korean government has recently announced. The Finance Ministry last month lowered the country’s outlook from 3.1 percent earlier this year. The government’s outlook, however, accounted for the minimum 10 trillion won supplementary budget, meaning that unless the National Assembly passes the supplementary budget the Korean economy could see a much slower growth.

Other institutions have been also readjusting Korea’s economic outlook as currently there are no specific events that would help propel the country’s economic growth, whereas the Asian market overall is expected to struggle in the second half.

“Difficult credit conditions will persist into the third quarter because of the continuing global volatility and China’s economic rebalancing,’ said Andrew Palmer, a credit analyst for S&P Global Ratings.

The report from S&P Global Ratings said China has been too slow on its structural overhauls while credit growth is too high.

The retardation in China’s economy could be translated into larger damages on the Korean export front, as nearly a quarter of goods exported from Korea are sent to China.

Additionally some in the industry warn that if China decides to raise its protective measures on trade with Korea to protest Thaad, it could inflict stronger damages on Korea’s exports.

LG Economic Research Institute also made a similar prediction in a report released on Tuesday. The think tank projected this year’s exports to fall to 6.3 percent compared to a year ago, while projecting the economy would expand 2.5 percent even when accounting for the supplementary budget.

“We expect once the 10 trillion won supplementary budget is implemented in the second half it will not only minimize the negative impact caused by the restructuring [of the shipping and shipbuilding industry] but also increase consumer spending and investments,” said Lee Geun-tae, senior analyst at LG Economic Research Institute. “However, it will not be enough to turn the tide against the falling growth.”

The researcher said it will be difficult to expect exports to recover since the economic momentum in advanced economies including the U.S., Europe and China have weakened.

There is already growing speculation that the Bank of Korea will once again lower its projection today. The central bank already revised the outlook from 3 percent to 2.8 percent in April. At the time the central bank forecast that the market situation would likely turn around in the second quarter. But as the global or domestic economy has failed to improve the local financial market is speculating that the central bank would likely lower its outlook between 0.1 percentage points and 0.2 percentage points. However, since the BOK unexpectedly cut the key interest rate, another rate cut this month seems unlikely.