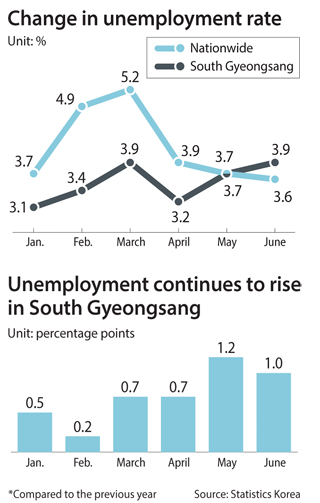 The restructuring of the shipping and shipbuilding industries is starting to affect the job market in Korea.

“We can’t say for sure that the rate for South Gyeongsang is rising due to the restructuring, but we can say that it might have affected the rate since the number of workers in the manufacturing industry fell rapidly,” said Sim Won-bo, a director at Statistics Korea.

In fact, the figure for the region showed growth at the beginning of the year. In January, South Gyeongsang’s unemployment rate rose 0.5 percentage points from the previous year and grew 0.7 percentage points each in March and April.

South Gyeongsang’s unemployment rate was the third lowest last year, but it has jumped to the third highest in the nation this year among 16 major provinces and cities, according to Statistics Korea. “We didn’t analyze the specific data per region but we did find out that the number of people working in the manufacturing industry continues to drop in South Gyeongsang,” said Sim.

“We believe the rate for such regions related to shipbuilding will continue to grow for a considerable amount of time, since many shipbuilding companies will precede their restructuring plans,” said Kim Yi-han, a director at the Ministry of Strategy and Finance. “We need to execute the supplementary budget as soon as possible in order to minimize the negative impact coming from restructuring later this year.”

“The youth unemployment rate tends to be higher in June since this is the month when many young people are taking government job entry exams after they were accepted for the first round of the job application process,” said Sim.

The employment rate for people ages 15 to 64 rose 0.5 percentage points from the previous year to 66.5 percent in June.