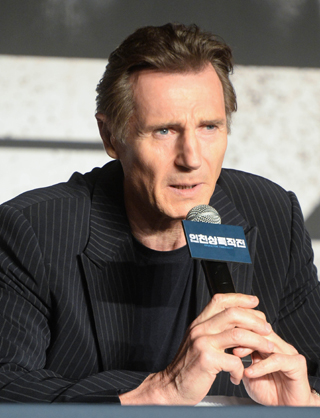 Neeson arrived at Incheon International Airport on Tuesday, and attended a press conference the following day at the Conrad Hotel in Yeouido, western Seoul.

The film focuses on the famous Battle of Incheon, also known as Operation Chromite, which took place on Sept. 15, 1950.

“I always had an interest in the Korean War mainly because it was a forgotten war in the States,” said Neeson when asked why he decided to take part in the film.

“It was a wonderful script. Very complex story but easy way to follow for audiences. It’s very emotional and touching on many levels.”

Neeson said that he relied on many books and historical documents to become fully immersed in his character.

“It is always difficult to portray someone who actually lived, because as an actor you want to get it right,” he explained.

Neeson added that he tried to focus on perfecting small details, such as the way MacArthur always held a pipe in his mouth.