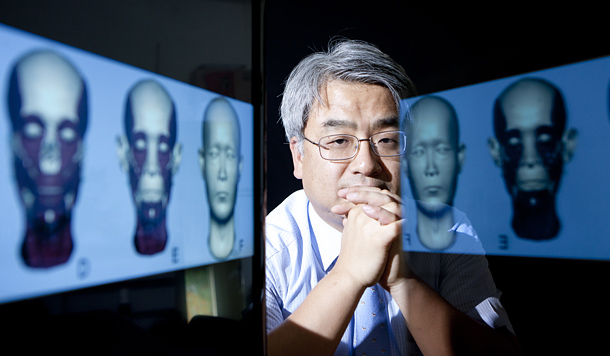 Shin Dong-hoon, a professor at Seoul National University’s College of Medicine, studies the history of diseases. He says he considers himself lucky to be in the field, which he describes as a cross between medical science and liberal arts. [KWON HYUK-JAE]

Shin Dong-hoon, a professor at Seoul National University’s College of Medicine, is more than just a doctor for the dead.

Shin is a paleopathologist, which means he studies ancient diseases.

But while he does apply the tools of modern medicine like CAT scans and DNA analysis to tissue left behind by ancient people, that’s only part of his work.

He sometimes visits excavation sites with tools like an archaeologist. Other times, he sifts through historical documents like a historian. 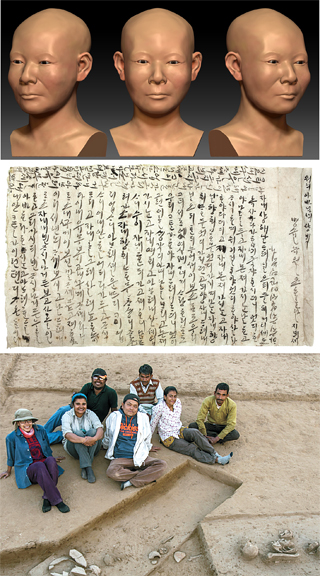 Top: The digital reconstruction of a woman who died 1,500 years ago. Shin Dong-hoon and his team put together dozens of bone fragments for the project.Middle: A love letter that was found on a mummy in 1998 made headlines in Korea and abroad, raising awareness about the study of mummies. Bottom: Researchers in India that Shin is working with on local DNA analysis and facial reconstruction projects. [JOONGANG ILBO]

Shin’s work, then, can be best described as a marriage of medical science and liberal arts.

When the JoongAng Ilbo visited Shin’s lab to find out more, the reporter found him at his desk, which faced a map of ancient Seoul. Based on his most recent project, it seemed like the spot ought to have been occupied by an anatomical chart.

“I studied the levels of parasitic infections of the Joseon people,” he explained, referring to Joseon Dynasty (1392-1910). “I visited various excavation sites in Seoul for three years starting in 2010 and collected samples.”

Shin’s study found that as the population of Seoul rose in the 18th century, demand for vegetables also increased. The crops were fertilized with human feces, and this led to a sharp rise in parasitic infections.

In just one gram of human remains from the period, he said, up to 165 parasite eggs can be found.

In the other corner of the lab sat a stack of transparent plastic boxes, all of which contained the remains of ancient Koreans from all across the peninsula.

“Each box is for one person’s remains,” he said. “I’ve been collecting for about a year, and I think we have about 200 now.”

But that figure is far less than what Shin hopes for. He said there should be at least 1,000 to 2,000 in order for his team to develop a better picture of diseases from different eras.

Q. Based on the careful way you keep people’s remains, it seems they are more than mere objects to you.

A. Yes. They all ate, breathed and lived, like we do now, at one point in history. And I’m sure many of their descendants are our contemporaries. So yes, I must treat them with respect. Also, they are like time capsules of our past. We learn from them what our ancestors ate, what diseases they suffered from, what work they did and so on.

Let’s talk about the reconstruction of a Silla woman. I heard you put together 95 bone fragments.

Yes. Her skull was broken to pieces. First, we did a CAT scan on the pieces and then we put the images together. So the skull was first restored virtually in 3-D. And based on that, we recreated her head. In Korea, few remains can be found that date from before the Goryeo Dynasty (918-1392), so it’s quite meaningful. We also found out that she was a vegetarian. We plan to use this digital modelling technique with other remains too.

You also study Korean mummies. How did you start?

I saw my first mummy in 2001. It was a boy, named Dan-woong, of the Hapyeong Yun clan from Yangju, Gyeonggi. He was kept at Dankook University’s anatomy lab and I was brought in to help with the study. Since him, I’ve studied 25 more mummies. Previously, the study of mummies in Korea was mostly the study of ancient clothes, as Koreans buried their dead in many outfits. But over the years, medical examination of mummies also flourished.

Before your first mummy, did you know about Korean mummies?

No, I didn’t. I was surprised at how well-preserved they were. [Unlike Egyptian mummies, Korean mummies are preserved with their organs intact.] I was very lucky. I’ve been interested in history since when I was a student. I’ve found a field that fits my interests and is also quite unexplored.

Was it a difficult decision to become a paleopathologist?

Yes, but Seoul National University was conducting studies of human remains in the 1950s and ’60s. So in a way, we revived what our school did decades ago. The studies stopped because it’s not really a lucrative field, so the revival indicates that Korea is now advanced enough to care less about profitability and more about the overall significance.

What have been some of your most interesting discoveries?

You can rarely find dental cavities in ancient humans. Obviously, people at those times didn’t eat as much sweet stuff as we do today. Also, I wasn’t able to find that many tuberculosis germs in remains and mummies from before the 20th century. This was actually not what I had expected. But the low number of tuberculosis germs was due to the low population density of the times.

Stories about Korean mummies can also be found in foreign media these days.

Yes. In 1998, a male mummy was found in Andong, North Gyeongsang, and on his chest was a letter written in hangul (the Korean alphabet) by his wife. I joined the research team at a later stage, but the wife’s love for her husband was quite impressive. She also placed a pair of shoes made of her hair in his tomb. Our paper on this finding was published in the U.K.-based journal Antiquity and made headlines abroad. Romance and love letters touch people’s hearts in ways that transcend time periods and borders.

Have there been any other studies that were special to you?

We once studied Choi Gyeong-seon, who died 400 years ago due to a fracture of the jawbone and was mummified. After three years of work, we were able to reconstruct his face digitally in 3-D in 2010. His descendants were very cooperative during the process and also thanked us for the result. To show our gratitude, we made a portrait of Choi and gave them to his descendants as a gift.

Still, this field is largely unfamiliar to most people in Korea.

Yes, but in countries like the U.S. and U.K., this field has been around for more than 100 years. It deals with the evolution of mankind. It’s true that in Korea there is only a handful of researchers in this area. But I believe there will be more in the future.

I hear you are now involved in several projects abroad, including DNA analysis and facial reconstruction of remains found in India, home to the Indus Valley Civilization, and the study of mummies from Siberia’s indigenous peoples. Are they relevant to Koreans?

That’s what most people say, [but] would anyone say such things about inter-cultural cooperation in areas like physics or math? There is no such a thing as Korean physics, or Korean math. We are studying the origin of mankind or the core of civilization, something that’s common and universal to all cultures. In the case of India, it’s where one of four civilizations began. Neither farming nor ranching began in Korea. They began with civilization.