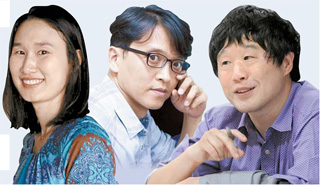 From the beginning of his recent interview with the JoongAng Ilbo, Shin Dong-hoon emphasized the critical role his team plays in his work.

“I cannot do any of this by myself,” repeated Shin, a professor at the Institute of Forensic Science at Seoul National University’s College of Medicine.

In fact, most of what he has been able to do was only possible because of interdisciplinary cooperation.

A paper on the reconstruction ran in a recent issue of the journal PLOS One, and there are 12 researchers from various organizations credited.

For this project, Shin worked particularly closely with Lee Won-joon of Seoul National University’s College of Medicine and Woo Eun-jin of Yonsei University’s College of Dentistry. Woo was a practicing dentist before obtaining her master’s and doctoral degrees in forensic anthropology in the United Kingdom, soon becoming an expert in the field.

Shin has been working with certain researchers for years now, including the renowned parasitologist Seo Min of Dankook University. The two are known as among the most renowned mummy scientists in Korea and have collaborated in some of the country’s most important mummy projects.

But depending on the study, Shin has worked with everyone from archaeologists, anthropologists, biologists, historians and apparel experts.

“I think this also signifies that Korean academia has reached a certain level,” he said during the interview. “Only when a country has developed to a certain degree can there be a system for interdisciplinary cooperation. There is a room for improvement, but I think we are on the right track.”