The importance of communication

The importance of communication 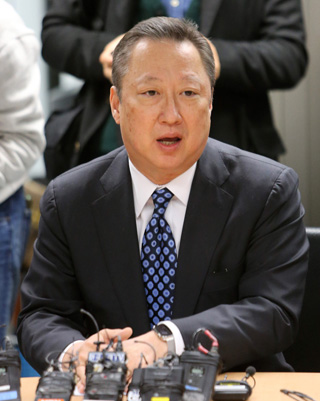 Park Yong-maan, the chairman of Doosan Infracore, meets with reporters frequently. He is a member of the Doosan Group’s owner family and had also served as the group’s chairman, but he still likes to talk to reporters over beer and chicken. At a year-end party, he moved around and talked to different people. He is different from other owners and CEOs, and is often called “eccentric” or “political” as a result. But his efforts to communicate with people are noteworthy.

The ultimate weapon in fighting discord is communication. In the business world, transparent communication is the shortcut to eliminating anti-corporate sentiment. It is the power of communication that unites employees and executive to further their company.

Korean companies don’t seem very good at this. People take the ideas and words of the company owners and CEOs very seriously and carry out orders. Employees prioritize what their bosses think. In this kind of work culture, both employees and executives become sarcastic and passive. It is sad that many self-deprecatingly call themselves “company cattle.”

Communication and unity are even more important in times of crisis. Earlier this month, some businessmen issued warnings. Samsung Electronics’ three leading executives — Vice Chairman Kwon Oh-hyun and CEOs Yoon Boo-keun and Shin Jong-kyun — said that they cannot guarantee the company will still be competitive five or ten years from now. SK Group Chairman Chey Tae-won said he was worried the group’s about “sudden death.” They used internal bulletin boards and in-house broadcasts.

It is good they tried to communicate. But it would have been better if they used more inclusive methods like internal discussion sessions. It is vital that a mechanism exists to take the opinions of a company’s workers up to management. Only then can the company become healthier and more profitable.

Last year, I met with Kazuo Inamori, the honorary chairman of Kyosera Group. He is considered one of the three gods of business management in Japan. The one-hour interview was like a philosophy lecture. He emphasized that the future of a company depends on the execution of a management style that is rooted in principles like altruism and sharing.

In the past year, communication and sharing have become more important than ever. Companies are faced with new challenges like restrictive regulations, waves of new industries and the rise of China.

Nevertheless, they cannot forget the value of sharing, caring and communication. Only when companies actively pursue these values can they ask the National Assembly, the government and the people to remove regulations and help them. That’s the way for industries to survive.


*The author is a deputy editor of national news team 2 at JTBC.