LG Display says OLED is a major part of its strategy

LG Display says OLED is a major part of its strategy 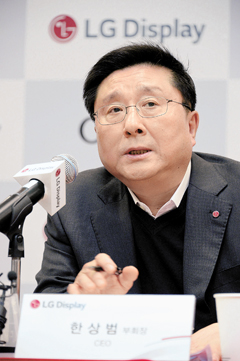 While the nation’s leading display panel maker is a dominant player in OLED TVs, it has been lacking a presence in small and medium-size OLED screens. Meanwhile, its competitor, Samsung Display, has more than 90 percent of the market share.

“It’s true our investments in small and medium-size OLED screens have been lacking compared to TVs, but the decision was based on our major customer portfolio, which is different from our competitors,” Han said.

“But since flexible OLED is a new mega-trend [in the small and medium-size display market], I won’t deny that we will put effort into that business.”

Flexible OLEDs, also called plastic OLEDs since the panel is based on plastic materials rather than glass, is a next-generation display developed by manufacturers seeking new sources of profit.

“It is relatively more costly to develop plastic OLEDs, so we will have to consider what our customers are looking for to set a detailed timeline of our developments,” Han said. “But we will be prepared.”

The company will spend roughly 10 trillion won ($8.7 billion) to build a new plant and expand production of a newer type of display at the Paju research and development center. The plant, to be named P10, is currently under construction.

“Our P10 facility will be used for developing plastic OLEDs,” Han said.

Still, the company does not plan to let go of its liquid crystal display (LCD) business, its most profitable for the time being.

“I know our competitors are reducing their LCD businesses following the trend toward OLED, but it really depends on a company’s customer base,” Han said. “For us, OLED TV sales account for only 10 percent of our revenue, and we still need to maintain our LCD business to sustain investment for future OLED technologies.”

When asked about speculation that Apple might be using more flexible OLED screens instead of LCD for its new high-end smartphones, Han said it does not mean the smartphone maker will ultimately drop LCD panels, which LG has been supplying.

He said LG is still in good talks with Apple.

“I can’t give a detailed comment, but I can say that we can take a step back in order to advance two steps later,” Han said.