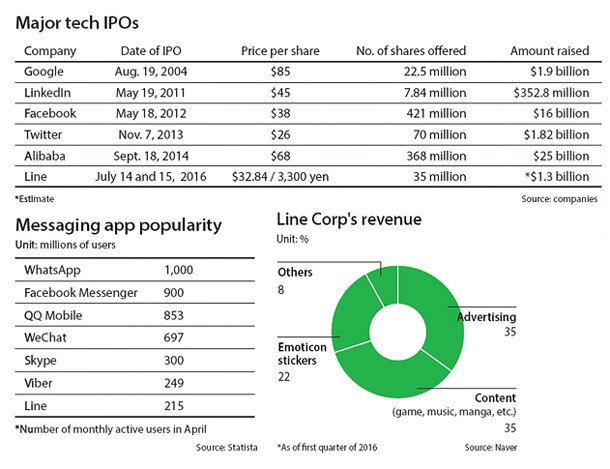 Through the initial public offering (IPO), Line Corporation is expected to use the funds as a bullet to ramp up the scope of its business and expand beyond Southeast Asia, its stronghold thus far.

Speculation is high that Line will assign part of the capital to step up research and development and carry out mergers and acquisitions.

“Listing in the New York Stock Exchange will significantly promote Line across the globe,” said Ahn Jae-min, an analyst at NH Investment Securities. “It’s true that the messenger app has a comparatively smaller presence in North America [home to the world’s top messenger WhatsApp] and Europe, but the listing will definitely help increase the number of users, which will naturally lead to more business opportunities there.” 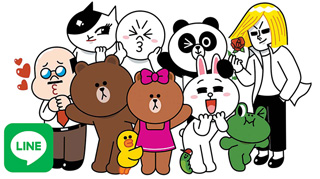 Even though it has a mere 16 million users in Korea - largely due to the dominance of KakaoTalk, dubbed the “national messenger” with 41 million users - Line is the world’s seventh-most popular online chat app as of April, with 215 million users around the world.

The app is particularly popular in Japan (which has the largest user base at 68 million), Thailand, Taiwan and Indonesia, where the number of monthly active users amounts to a combined 151.6 million. Line has been starting a range of localized businesses to capitalize on the large user base in those markets.

Advertising and content sales accounted for 70 percent of Line’s revenue, whereas income from selling emoticon packs featuring the app’s Line Friends characters and other animations made up 25 percent of revenue in the first quarter this year, according to Naver.

A large portion of the remaining revenue comes from a range of on-demand services. Line operates taxi-hailing services in both Japan and Indonesia; a restaurant reservation service in Japan; and Line Man, a delivery service, in Thailand.

Line is also betting on increased revenue in advertising and paid content on the back of Line TV, a Naver insider said, which provides full episodes of TV dramas, variety shows, music videos and Line-only exclusive content that is popular in Taiwan and Thailand, where the Korean Wave, or Hallyu, remains hot.

The majority of regional offices are run by locals, a strategy that has allowed Line to come up with products best suited for each market’s users.

“Localization has made what Line is now,” said Shin Joong-ho, chief global officer at Line Corporation.

A Naver spokesmen refused to comment on speculation, citing a media blackout period ahead of the IPO, adding that Naver’s chairman, Lee Hae-jin, will provide further details on post-IPO business plans and possible mergers and acquisitions during a press conference on Friday.

“It’s the third tech IPO to price above range globally this year,” Dealogic said, adding that only seven tech companies totaling $894 million have priced in the United States thus far, down from 18 offerings totaling $4.5 billion in the same period a year ago.

Line set the price for its dual Tokyo-New York listing at 3,300 yen a share, popping up its initial price range a week earlier due to buoyant demand.

Nikkei reported on Wednesday the IPO is nearly 25 times oversubscribed.

“Interest is particularly strong among non-Japanese investors, with the oversubscription ratio reaching the high-20s multiple range,” the report said. “A relatively low number of large-scale IT-related IPOs around the globe this year is cited as part of the reason for the strong enthusiasm.”

Line Corporation’s listing is seen to have an upbeat influence on its mother company Naver, which owns a 72.6 percent stake.

“Naver has thus far supplied funds to Line Corporation, and the IPO will finally help Line stand up on its own, saving Naver’s expenditure,” said another Naver insider. “It means Naver will gain that much capital, which it can allocate to developing new growth engines.”

Naver has been seeking to leapfrog into a comprehensive technology company matching the likes of Google. The Bundang-based company has been beefing up its research on artificial intelligence, robotics and smart cars and diversifying its business portfolio with a focus on the lucrative mobile shopping platform.

“If the Line share prices pick up following the IPO, it will have a positive impact on Naver’s share prices, too,” said Choi Kwan-soon, an analyst at SK Securities on Thursday, adjusting the target price from 780,000 won to 830,000 won.