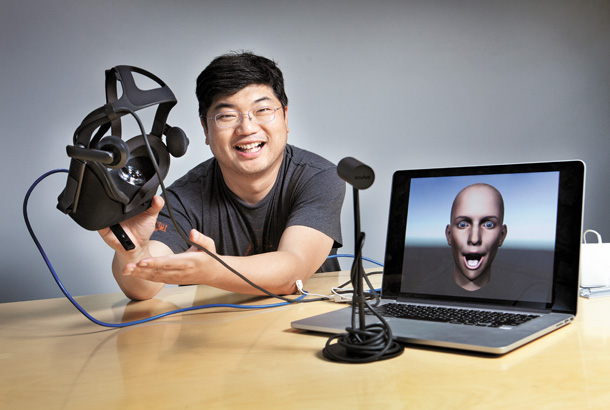 Yu Ji-hun, CEO and co-founder of BinaryVR, demonstrates a virtual-reality program that can map users’ facial expressions onto a 3D avatar at the company’s office in Yeoksam-dong, southern Seoul. [PARK SANG-MOON]

SECOND IN A SERIES

In the Facial Performance Capture team at the studio, he worked on creating visual effects on characters from “The Avengers,” “Warcraft” and “Teenage Mutant Ninja Turtles” during a stint from 2011 to 2015.

Yu, 39, wanted to bring the multitude of human facial expressions to a digital platform since communication on social networking platforms often lacks emotion.

And this is how the Korean native started his company BinaryVR in April 2015, leaving behind his job at ILM.

“Facial expressions including gaze and movement of other face parts are important to communication and make sense of the real intention,” Yu said.

“I thought it would be good if we can bring the elements on to the digital platform.”

In its latest milestone, the company fostered a partnership with High Fidelity, a San Francisco-based start-up founded by Second Life founder Philip Rosedale.

High Fidelity’s platform is described as an “open source, shared Virtual Reality” application that gives people a virtual platform to build whatever they want from games and networking.

BinaryVR will provide a sensor-based capture of gazes, facial expressions for the upcoming interface, which is currently in beta.

Rosedale serves as an adviser to BinaryVR.

As the deal with High Fidelity implies, Yu has set the United States as a primary target market along with China. “When it comes to VR, Korea is still a small market,” he said. “The U.S. and China will be the main markets.

“China, for example, sees the rapid adoption of commercial VR devices and the increase in sales of those headsets. And the trend will become more obvious as [consumer electronics company] HTC Corporation is gearing up to build 10,000 VR gaming rooms across China.” 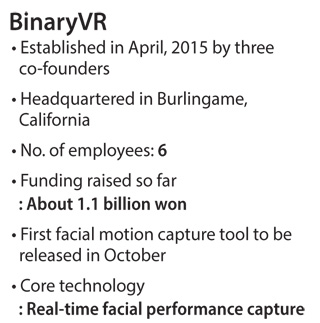 But it doesn’t necessarily mean that BinaryVR will have no presence in Korea as it has an office in Yeoksam-dong, southern Seoul.

“In Korea, we are in talks with a local video streaming service provider to offer fun special effects while the independent broadcasters or BJs do their job.”

Yu believes that the Binary’s technology could also be used in a wider set of virtual services in education, consulting and remote medical treatment, bringing more human elements to online interaction.

“The facial performance tracking avatars can be used in English education platforms,” he said. “The virtual setting can put teachers and students in different situations to facilitate conversation practice.”

Yu added that the real-time technology can deliver audio syncs with little latency.

He is also looking at an online casino game segment where psychology and gamblers’ reactions matter.

Besides the 3D avatars, BinaryVR is on track to produce a 3D avatar that resembles the user in addition to tracking facial expressions.

Only one year into the founding, the VR start-up already has scored several rounds of funding totaling about 1.1 billion won ($961,891), including a government-initiated infusion.

Kim Kee-jun, a partner at K Cube Ventures, has high hopes for BinaryVR. “When the technology of BinaryVR R&D is introduced to the global VR market, there is the expectation they will scale virtual reality,” Kim said.

When asked whether Binary would consider a project with Kakao, the owner of venture fund and mobile instant messenger Kakao Talk, Yu said they’ve held talks. “We’ve discussed cooperation on mobile solution, but nothing has been decided.” 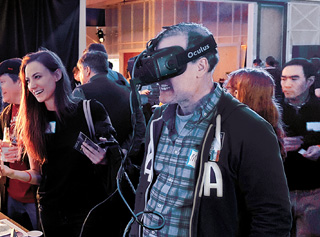 Visitors at SFVR, a San Francisco-based virtual reality meetup, test BinaryVR’s technology. The company was started by a Korean native in 2015. [BINARYVR]

The company previously was supported by Boost VC, a start-up accelerator in Silicon Valley.

But his experiences in the U.S. made him think that becoming a tech entrepreneur wasn’t a distant dream. “I saw a number of my colleagues who worked with me at ILM build their own companies and succeed,” Yu said.

“The companies include Nimble VR which was acquired by Oculus. So, I thought: ‘I can do and run my own business.’”

He met like-minded folks who later became co-founders of BinaryVR. Along with Yu, Kenneth Ryu and Park Jung-woon jointly run the company.

The United States is also where VR as an entertainment tool has taken off with prominent Silicon Valley players like Facebook and Google.

Pioneered by U.S. tech giants, the sector is expected to flourish in the coming years. According to the latest estimation by global market research firm TrendForce, the total value of the VR market (including hardware and software) will reach $6.7 billion in 2016 and will skyrocket to $70 billion in 2020.

Yu said that significant revenue has yet to come, but the release of a development kit for real-time facial capture solution will keep the company on track.

“We will release the kit in October and the solution is customized for business operators rather than retail consumers.”

On the sidelines of the main business, BinaryVR also released an app called Jukeface on iOS.

It is a camera app that can create a real-time 3D model of users’ face and map it onto anything from pictures of animals and celebrities to animated characters.

“The facial tracking technology can be applied to different services,” he said, “But my long-term goal is to make the technology a default option on different VR devices to create more realistic virtual reality.”