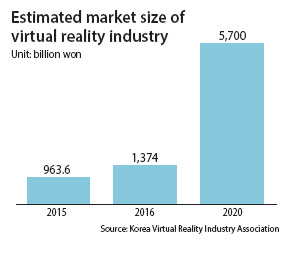 But when it comes to virtual reality (VR) gaming rooms, the latest version of such entertaining arcade, the country falls behind as there is no VR gaming center in Korea.

The move showed the Korea is still in the relatively early stages of VR industry development compared to other countries like the United States and China. Besides the VR cafe, commercial VR devices such as Oculus Rift and HTC’s Vive are not available in Korea.

As for why Korea is left out in the first round of new releases, Oculus CEO Palmer Luckey attributed it to government regulations on his Twitter.

The Ministry of Science, ICT and Future Planning said that the ministry and the Ministry of Culture, Sports and Tourism that regulates the games industry have eased regulation, adding that three VR headsets developed by Oculus recently passed government safety screenings on electric waves.

“We have a similar level of test process with other countries,” said Kim Kyung-sam, a spokesman at the ICT Ministry. “When it comes to content deliberation by the Culture Ministry, the 19th National Assembly passed a bill aimed at easing standards.”

Wow Insight never applied for tests and certification, he said.

Still, he acknowledged that VR-based content providers and operators of VR gaming room should go through different phases of regulation.

“It goes in three phases, the providers first need to pass electric wave test,” Kim said, “and the Culture Ministry will look at the contents - whether it is appropriate for children. In the case of VR rooms, the operator should also make sure that the devices and simulators are all safe.”

Besides the regulation issue, the private sector appears to be slow to adopt and build software tailored for VR devices.

Many expect that big game companies such as Nexon and NCsoft will jump on to the VR bandwagon but they’ve taken a more cautious approach.

“Some media companies participated in VR-related projects, but the market size is considered small. So, the production of software that can be built on VR devices is limited,” the Korea Creative Content Agency said in a report released this month.

The tepid movement draws a sharp contrast with what happens in the U.S., Japan and China. The U.S. has seen a flurry of projects related to VR aimed at delivering more refined sources of entertainment through the VR headsets.

Sony is gearing up to provide a more immersive setting when playing PlayStation with its PlayStation VR Headset scheduled to be released in October.

Though slow, Korea is playing catch-up.

Korea Virtual Reality Industry Association said that the VR market in Korea was 963.6 billion won ($840 million) last year and will grow an estimated average of 40 percent every year to reach 5.7 trillion won in 2020.