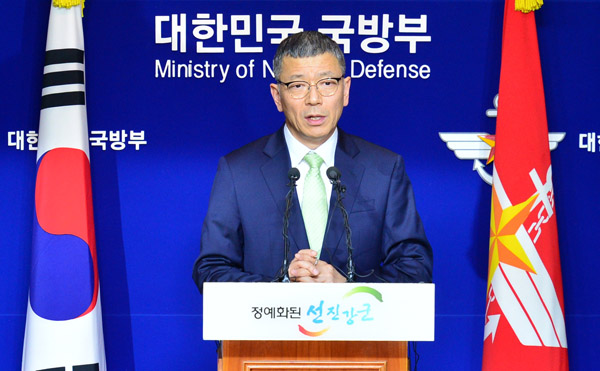 In the briefing room of the Defense Ministry in Yongsan, central Seoul, on Wednesday, Yoo Jeh-seung, defense deputy minister for policy, announces that Seongju in North Gyeongsang will be the site for the deployment of the Thaad system. [NEWSIS]

The rural town of Seongju in North Gyeongsang will be the site for the U.S.-led Terminal High Altitude Area Defense (Thaad) system, the Ministry of National Defense announced Wednesday.
A joint survey team comprising experts from South Korea and the United States has conducted evaluations of several possible sites for the American anti-ballistic missile system, the ministry said.
Military effectiveness and the safety of local residents were considered in the survey and Seongju was subsequently recommended as the best site. The ministry said defense ministers of the two countries approved the selection.
After a continuing series of nuclear and missile tests by Pyongyang, Seoul and Washington reached a decision to deploy Thaad on Friday.
China, Russia and North Korea have opposed the deployment of the Thaad system in South Korea.
Seongju is located near the U.S. Forces Korea’s Camp Carroll in North Gyeongsang. The rural town is also located out of the range of North Korea’s newly developed long-range artilleries, soon to be deployed near the inter-Korean border.
The Seoul metropolitan area will not be covered by the Thaad system’s interceptors, which have a range of 200 kilometers (124 miles). The ministry said the system in Seongju will protect as much as two-thirds of South Korean territory from the North’s nuclear and missile threats.
The ministry added that the ability to protect the nation’s major infrastructure installations, such as nuclear plants and fuel storages, will also be strengthened.
The site also has a lower population than other candidates. As of now, a South Korean artillery base is located in Seongsan-ri of Seongju County and the ministry reportedly planned to relocate the unit and offer the site to the U.S. military to deploy the system.
Seongju County has a population of 45,000 people and Seongsan-ri has about 2,800 residents.