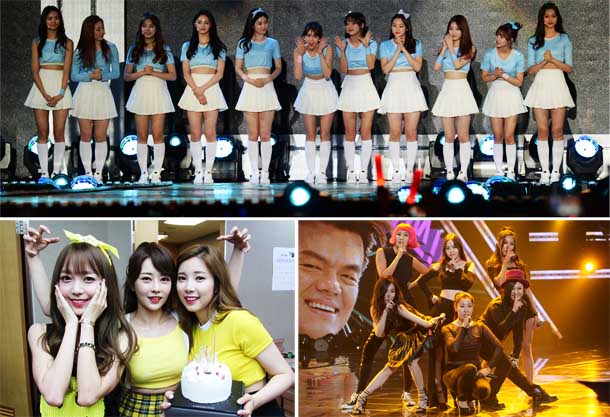 Many of Korea’s most popular girl groups have been around for almost a decade, but a number of young upstarts have shot to fame through features on reality TV programs.

Some of the most popular include Unnies, C.I.V.A and I.O.I, all of which have promised only to perform together for several months.

Despite their shared temporality, the groups’ members come from different backgrounds.

Unnies consists of six celebrities including comedian Kim Sook, model Hong Jin-kyung and actress Min Hyo-rin. Despite their respective success, they decided to form a temporary girl group as a project, and even performed during the music program “Music Bank.”

C.I.V.A’s three members and I.O.I’s 11 members, on the other hand, are all former girl-group trainees.

The groups have been huge hits on music streaming services such as Mnet, MelOn and Bugs.

When C.I.V.A unveiled their single “Why Do You Call Me” last week, it quickly became the top song on Mnet.

The same happened to I.O.I, whose single “Dream Girls” dominated numerous streaming services as soon as it was released in May.

An integral part of the groups’ near instantaneous success has been their appearance on reality TV programs.

Unnies, for example, gained exposure through the show “Unnies’ Slam Dunk” prior to releasing “Shut Up.”

The program offered the public a glimpse of the six members learning to be a girl group, doing everything from practicing singing and dancing to recording music

C.I.V.A starred in the reality show “God of Music 2,” which concluded as soon as the group debuted.

I.O.I was the product of the survival audition program “Produce 101,” which aired in the early part of this year.

“If it were not for those reality shows, people would not even have known about their existence. The popularity of those female acts proves the influence of broadcasting.”

Ha added that fans can relate to these new groups because they’ve been able to see on the shows how much effort the artists put into their songs.

Hwang Jin-mi, another culture critic, also agreed with the significance of the role reality programs play in promoting girl groups.

“Girl groups from these shows reach stardom not based on the quality of their music,” Hwang said. “Rather, their frequent exposure leads the public to recognize and naturally become fond of them.”

People have become overwhelmed by the number of girl groups, Hwang said, and so they turn to those that are most familiar with.

But not all temporary groups are successful.

After “Produce 101” became one of the most popular shows in the earlier part of this year, CJ E&M decided to make a similar program that would produce an all-male group. The show, titled “Boys 24,” kicked off last month.

The average viewership rate of the program is 0.6 percent, compared with the 4.4 percent seen by “Produce 101,” according to Nielsen Korea.

Part of that may have to do with the participants’ appearance.

Many online users have left comments on articles about the show’s poor performance to say they stopped watching because the participants in “Boys 24” look much less attractive on TV than they did in the promotional photos.

“When it comes to appearance, people typically have higher standards for girl groups, and so the women on the shows are more attractive,” said Hwang.

“As a result, the shows about girl groups are often easier to publicize.”