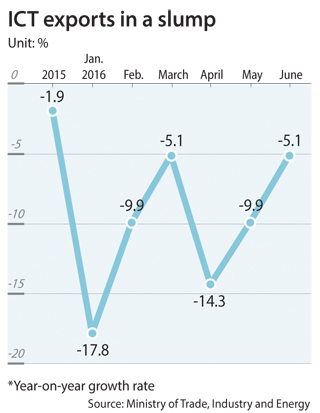 Exports of information, communications and technology, or ICT, products fell for the ninth consecutive month as cellphones and televisions continued to be weak in foreign markets.

According to the Ministry of Trade, Industry and Energy on Thursday, ICT exports fell 5.1 percent year-on-year in June to record $13.48 billion. After posting a year-on-year decline of 1.6 percent last October, exports have been on a downward slide.

However, the Trade Ministry said the figure for June is a smaller decrement than the 9.9 percent in the previous month.

Exports to Vietnam rose 20.1 percent year-on-year and increased in India to 37.7 percent during the same period. However, exports to China and Hong Kong fell 6.7 percent and dropped 9.1 percent for the European Union.

Overall, exports of ICT products fell 10.4 percent to $76.4 billion during the first half of this year compared to the previous year.

“The figure fell as the global economy continues to be slow and local companies start to operate manufacturing plants in foreign countries,” said Kim. “Even though the export fell compared to the past, it is still not that bad considering figures from other developed countries.”

In fact, ICT exports of major OECD countries fell 11.3 percent in the first quarter compared to the previous year. For China and Japan, exports dropped 7.5 percent each, according to the Trade Ministry.

The Trade Ministry cited new midprice smartphones as one of the biggest factors for fall in exports of cell phones.

“New smartphones such as Samsung Galaxy S7 and LG G5s were released earlier this year but it appears that the number of people changing their phones when new products come out has dropped compared to the past,” said Kim. “Major smartphone manufacturers were also hit by those who produce relatively cheaper phones such as Huawei.”

The growth rate for the number of smartphones shipped globally fell 3.4 percent in the first quarter of this year. It grew 12.2 percent in 2015.

The display market also was hit by competition from other manufacturers as well. According to the Trade Ministry, the price of a 43-inch LCD TV panel fell from $106 in December to $97 last month, which had an effect on local manufacturers.

“Demand for displays is falling and oversupply by Chinese manufacturers is hurting local display manufacturers,” said the country’s Trade Ministry.