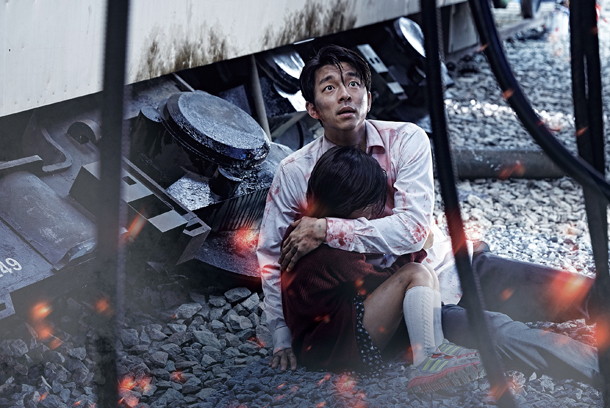 “Train to Busan” tells the story of a group of people, including Seok-wu (played by Gong Yoo), above, who board a high-speed train to Busan just as the outbreak of a zombie virus begins. [NEW]


Korean audiences may be unfamiliar with the walking dead, but not for long.

The film, which tells the story of a group of people aboard a bullet train to Busan fighting to survive an outbreak of a zombie-making virus, has received almost unanimously positive reviews from critics, some of whom have predicted it will sell more than 10 million tickets here.

It was previously screened in May at the Cannes Film Festival, where it was acclaimed by international audiences.

All of that is particularly impressive considering “Train to Busan” is director Yeon Sang-ho’s first live-action film.

“I was well aware that many Korean audiences would find zombie films unfamiliar, so I spent a lot of time thinking how to bring those exotic zombies into my film,” said Yeon during a press conference held late June at Jongno, central Seoul. “So I chose a location that is familiar to all. Reality was the most important thing to making this film right.”

People from all walks of life regularly board the KTX bullet train from Seoul Station to Busan, and the day of the zombie outbreak is no different.

Fund manager Seok-wu (played by Gong Yoo) and his daughter Su-an are taking the early morning train to meet Su-an’s estranged mother. Other passengers include Seong-gyeong (Jung Yu-mi), a soon-to-be mother, her macho husband Sang-hwa (Ma Dong-seok), as well as businessmen, high school students and a homeless man who sneaks into the bathroom because he can’t afford a seat.

It seems like an ordinary morning, with crew members exchanging pleasantries and passengers enjoying snacks. But as the train departs, a woman infected by the zombie virus jumps aboard and the turmoil begins.

There’s rarely a relaxed moment throughout the film’s nearly 120-minute running time, with the speed and claustrophobia of the train contributing to the chaos.

The film’s setting, as well as certain scenes, may remind some viewers of the Hollywood hit “Snowpiercer” (2013) by Bong Joon-ho, but “Train to Busan” is an original and even more thrilling ride. 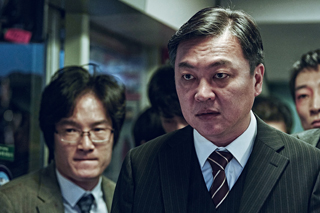 Actor Kim Eui-sung plays the role of Yong-seok, one of the passengers in “Train to Busan.” [NEW]

Yeon borrows from classic zombie tropes while adding his own spin. The virus here is transmitted instantly through a bite, and turns the infected all white-eyed and veins-bulging. These zombies are fast and nimble, but unlike in many other classic films, they slow in the dark.

This last characteristic is used to great effect, as it forces the passengers to move quickly during the brief moments of darkness that come when the train passes through a tunnel.

The way the zombies move is uniquely terrifying, and that’s thanks to the work of choreographer Park Jae-in. Limbs and joints pop in different and unexpected directions, leaving the audience unsure what will happen next.

The film’s rare moments of comic relief come from the character played by Ma, who helps “Train to Busan” find balance amid the intensity.

It’s an entertaining ride, but the film is also likely to strike a chord with Korean audiences considering certain events over the past several years.

The passengers inside the train are able to watch the news through small screens installed each car, and they learn of a series of nationwide accidents caused by the zombie virus.

The government keeps repeating that the public should not believe in groundless rumors and trust in its “rapid countermeasures against unknown riots.” But these messages are of little comfort to the passengers, who are fighting for their lives.

The scenes involving the news seem to serve as an indictment of the actual Korean government’s response to events like last year’s Middle East Respiratory Syndrome outbreak or the tragic sinking of the ferry Sewol in 2014.

It’s familiar territory for Yeon, whose last film, an animated feature, dealt explicitly with social issues like hierarchy and bullying. Though the director had said he wanted his first live-action project to be “a film filled with sheer fun,” the social commentary is subtle enough that it doesn’t detract from the action.

Long-time fans of Yeon’s previous and more experimental work like “The Fake” (2013) and “The King of Pigs” (2011) might be disappointed with his newest film, which undeniably commercial. Still, even they would agree that it marks a successful transition into live-action for Yeon, and heralds exciting things to come.

“Train to Busan” opens on Wednesday at theaters nationwide. It is rated 15 and over.