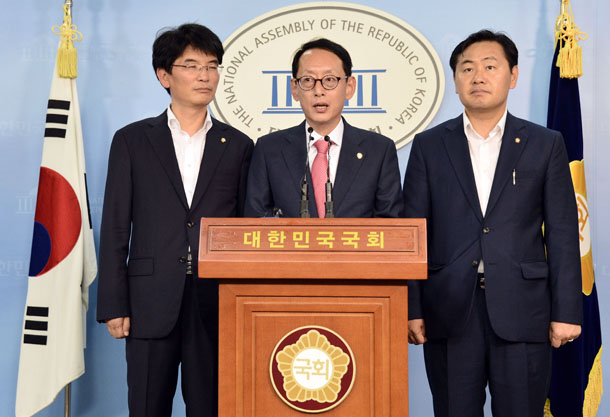 Chief deputy floor leaders of the three major parties announce on Thursday in the press briefing room of the National Assembly that the ruling and opposition parties agreed to question government officials next week, including the minister of national defense, on the Thaad issue. [NEWSIS]

A controversy over the legitimacy of the government’s decision to accept the U.S. deployment of an advanced missile system flared on Thursday after a research institute said the placement requires approval by the National Assembly.

South Korea and the United States decided last week that the Terminal High Altitude Area Defense (Thaad) system will be deployed on the peninsula as deterrence against the North’s nuclear and missile threats. Seongju of North Gyeongsang was selected on Wednesday as the site to host the American battery, which will carry the advanced anti-ballistic missile system.

While the government and the ruling Saenuri Party said the deployment requires no approval of the National Assembly, the liberal opposition parties, which protested the placement, said the matter should be deliberated and ratified by the lawmakers. Rep. Kim Hae-young of the main opposition Minjoo Party of Korea said Thursday that he had inquired with the National Assembly Research Service about the issue and was told that the Thaad deployment should go through a ratification process.

In a press release, Kim cited Article 60 of the Constitution as grounds for his argument that the government must obtain the lawmakers’ approval before bringing in the U.S.-led missile defense system.

“The National Assembly shall have the right to consent to the conclusion and ratification of treaties pertaining to mutual assistance or mutual security,” it said. “Treaties concerning important international organizations; treaties of friendship, trade and navigation; treaties pertaining to any restriction in sovereignty; peace treaties; treaties which will burden the State or people with an important financial obligation; or treaties related to legislative matters.”

According to the National Assembly Research Service, Seoul and Washington can proceed with the deployment by signing an implementation accord for the two main treaties governing the alliance, but there is reasonable doubt whether Thaad would be covered by them.

When there is reasonable doubt, the treaties and agreements should be interpreted and applied in a way that minimizes any infringement on sovereignty, citing the spirit of the Vienna Convention on the Law of Treaties, the research arm of the legislature said.

The Mutual Defense Treaty between the Republic of Korea and the United States, ratified in 1953, and the bilateral Status of Forces Agreement (SOFA), ratified in 1966, are the two main agreements governing the alliance.

While the Park Geun-hye administration argued that the advanced missile system should be considered a new weapons system of U.S. Forces Korea and its deployment requires no separate treaty, the research service said it was excessive to treat the Thaad battery merely as a new weapon.

A typical Thaad battery comes with a control center, Army Navy/Transportable Radar Surveillance (AN/TPY-2) radar deployed, six launchers and 48 missiles. One battery is worth up to 1.5 trillion won ($1.3 billion).

Noting that a treaty and ratification are required for matters that restrict sovereignty or incur fiscal burden, the National Assembly Research Service cited a precedent in the Netherlands over the deployment of U.S. nuclear weapons.

Although the Netherlands had an existing treaty with the United States, it said, the Dutch government obtained the approval of the parliament by forming a separate treaty.

The Park administration, however, insisted that there is no need for National Assembly approval on the Thaad deployment. Minister of Government Legislation Je Jeong-boo told the National Assembly on Thursday that it is not a matter requiring the legislature’s ratification.

Meanwhile, the ruling and opposition parties agreed Thursday that they will question government officials, including the minister of national defense, next week on the Thaad issue. Plenary sessions will be held on Tuesday and Wednesday to question Minister Han Min-koo and other government officials about the decision.

Key liberal politicians were split over the Thaad placement. While Kim Chong-in, acting chairman of the Minjoo Party, said he does not disagree with the deployment and that the matter does not require the National Assembly’s ratification, Moon Jae-in, former head of the party and one of the strongest presidential contenders, said the government must reconsider the decision and that National Assembly approval is a prerequisite.

The People’s Party founder, Ahn Cheol-soo, showed even more adamant opposition. Demanding the Park administration cancel the deployment, Ahn said Monday that a referendum should take place beforehand. He also said that National Assembly ratification is a must.